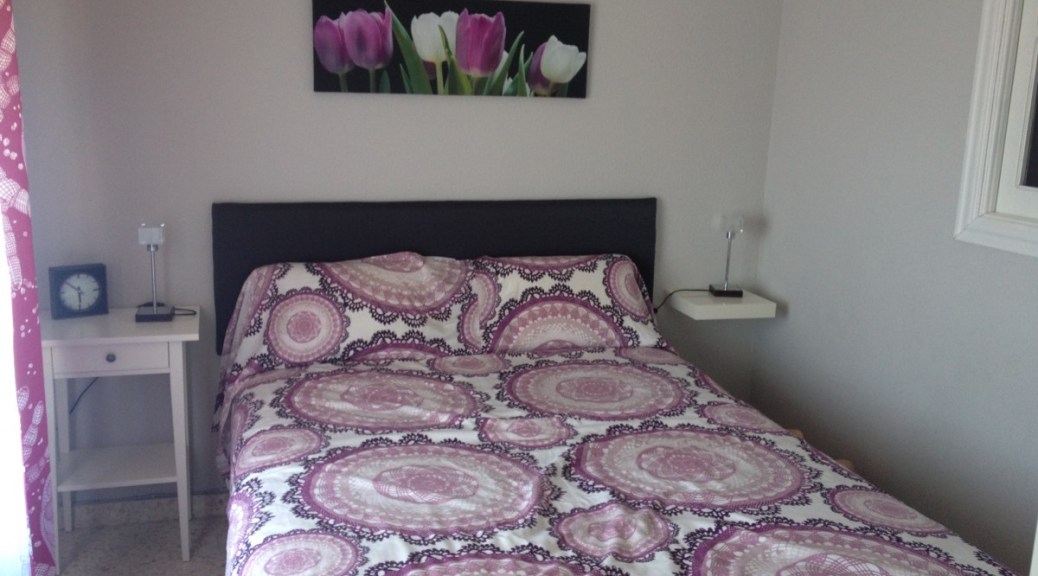 Since we had food with us, we didn’t need to look for the closest grocery store, but there are two bakeries right in the square, where you can have breakfast, as well as several cafés open late into the night.

The owner of the apartment speaks only Spanish, but if you don’t know Spanish, you can use Google translate to understand her messages. We initially communicated with her through TripAdvisor, and she was very prompt in replying, and answering our questions. Then we switched to email and texting after the initial contact.

We paid for the reservation through PayPal, but I see that you can now pay for that apartment through TripAdvisor through their Payment Protection plan.

For €65 a night you get two bedrooms, a smallish living room, a bathroom with a typical European deep bathtub, and a fully equipped kitchen.

The kitchen has a full size fridge, a four-burner stove top, a microwave, and a front loading washer. One thing it does not have is a dishwasher, so you’ll have to wash the dishes by hand.

The apartment also has an AC unit, which was a blessing since the day we visited it was very hot.

The owner’s daughter was waiting for us in the apartment when we arrived, and buzzed us into the fairly modern building. There is a short flight of steps before you get to the elevator, so the place is not suitable for people with limited mobility, but it was fine for us. The kids even preferred racing up the stairs all the way to the apartment, to see if they can beat the elevator that my husband took with the suitcases.

The bedrooms are nicely furnished, though one is a bit quirky – it does not have its own outside window. The window it does have opens onto the other bedroom. I probably would hate living in a bedroom without a real window for a longer period of time, but my son didn’t mind spending one night in the room.

Even though that bedroom has a single bed, it could sleep two, since there’s another mattress that pulls out from underneath.

My daughter loved the décor of the other bedroom, pictured at the beginning of the post, because of it’s purple accessories. That room has a balcony-type window looking out onto the square below.

The information about the apartment says it sleeps six, and that is correct – the futon style sofa in the living room opens into a wide bed, that needs to be folded for the day, however, or there will be no room left to walk around, and to get to the “pink” bedroom.

The white “side” table you see by the wall in a photo above is actually a dining table, which when opened gives you enough eating space for the family. That’s why there are four chairs stacked in the corner – they go with the dining table.

While I think most American families used to much bigger space would call this place cramped, this is how Europeans live – space is very valuable and you learn to use folding dining tables and futons in your day-to-day life.

All in all, I’d say Apartamentos en Merida was a perfect place for our stay in Merida.