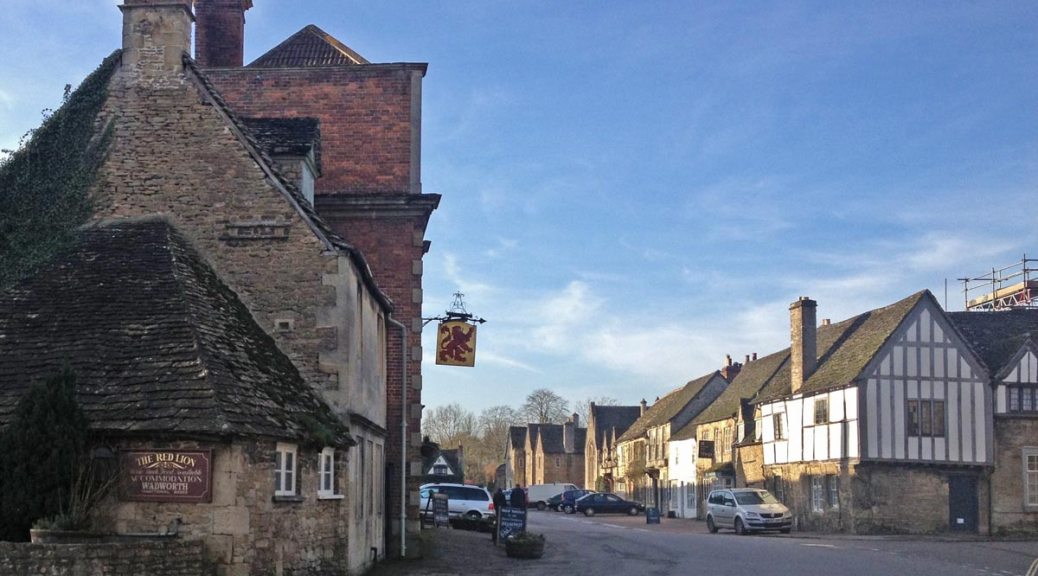 Have you ever seen the village of Lacock in Wiltshire, UK?

Before you say “No,” let me ask you – Have you ever watched the 1995 Pride and Prejudice, Moll Flanders, The Mayor of Casterbridge, Cranford, Wolfman, Downton Abbey, or Harry Potter?

If you answered “Yes” to any of the above, then you have seen Lacock. On screen.

Compare the image above with the shot below. Look familiar?

You can also see some great shots of the cast of Downton Abbey in “Downton Abbey filming held back by local tour guide.”

The village of Lacock, owned almost entirely by the National Trust, and located about a hundred miles west of London, has been used for filming several period movies and TV shows.

We went there in January 2013 with David’s Day Tours, a custom sightseeing guide we hired to take us to Stonehenge and Bath, but trust me, the village hasn’t changed much since then, thanks to the generosity of Matilda Talbot (formerly Gilchrist-Clark) who inherited the Lacock estate in the early 20th century from his uncle.

In 1944 she presented Lacock Abbey, Abbey Farm, all of the village that she owned and 284 acres of land to the National Trust.

As the Lacock Community Portal says, most of the houses in the village were built in the 18th century or earlier. The oldest buildings date back to the 14th century! And Lacock prides itself on preserving the history, character, and charm of the bygone days.

One of the oldest buildings in the village is The George Inn, a restaurant housed in a building from around 1360s.

The Red Lion hotel and restaurant, in front of which scenes from Pride and Prejudice where shot, seems young in comparison, even though it was built way back in the 1700s.

A Bit of History

The best accounts of the history of Lacock I found are on the “Wiltshire Community History” page of the Wiltshire Council site, and “About Lacock” on the Lacock Unlocked site.

According to these sites, the earliest finds in Lacock date from the Roman times, and were mostly coins. There was a major Roman road running through the south of the parish.

The name Lacock might have been derived from the Saxon Lacuc, which meant “a small stream.”

In 1232, Ela, Countess of Salisbury, founded a nunnery at Lacock and built an Augustian house, now known as Lacock Abbey. In 1540, Sir William Sharington converted the abbey into a manor house. Scenes from several movies, including Harry Potter, were filmed at the Lacock Abbey.

If you’re planning to visit Lacock when you’re in the neighborhood (Stonehenge is about 25 miles southeast, and Bath is about 15 miles west) you might find this Lacock village map useful.

You can also download to your mobile device a free audiovisual guide to Lacock, which you can review ahead of time in “Armchair” mode or “Live Play” as you walk around the village.

I had never heard of Lacock before our trip, but I’m certainly glad David suggested we stop there for a brief visit. It’s a lovely village, and walking down the narrow streets, looking at the houses with slate roofs and multi-pane windows, you feel like you’ve been transported back in time.

Well, my daughter (the younger one) was barely six at that time and really didn’t care much for looking at old buildings. My son, who was eleven, was somewhat impressed by how old the buildings were, though for the most part he claimed he was bored.

I think now, knowing how many movies have been shot here, we’d do a “scavenger hunt” of sorts, trying to find all the locations, and they’d be much more excited trying to find the house that “played” Godric’s Hollow.

Yes, I’m thinking maybe we should go see this place again some time.

Other blog posts about Lacock

Not surprisingly, Pride & Prejudice and other period movie lovers have blogged about Lacock extensively. One of the posts I like is “Lacock – my Bath trip part 7” by The Secret Dreamworld of Jane Austen Fan, which includes photos from Lacock mixed with screen shots from the movies.

Where to Stay in Lacock?

We didn’t stay at Lacock overnight, unfortunately, but there are a few accommodations in the area that you might like to consider. I’m thinking next time we’re in the area, we just might.

If this brief overview of the village makes you think you might want to visit it some day, feel free to pin it to your board on Pinterest.

Or, follow my Uk | Wiltshire | Lacock board, which includes not only this posts, but also all the links mentioned in this post, and more.

If the link up is still open, feel free to add a link to one of your posts below, then comment on three linked up posts. I welcome comments as well, of course, and will reciprocate as soon as I can.

47 thoughts on “Have you ever seen the village of Lacock? You might have”