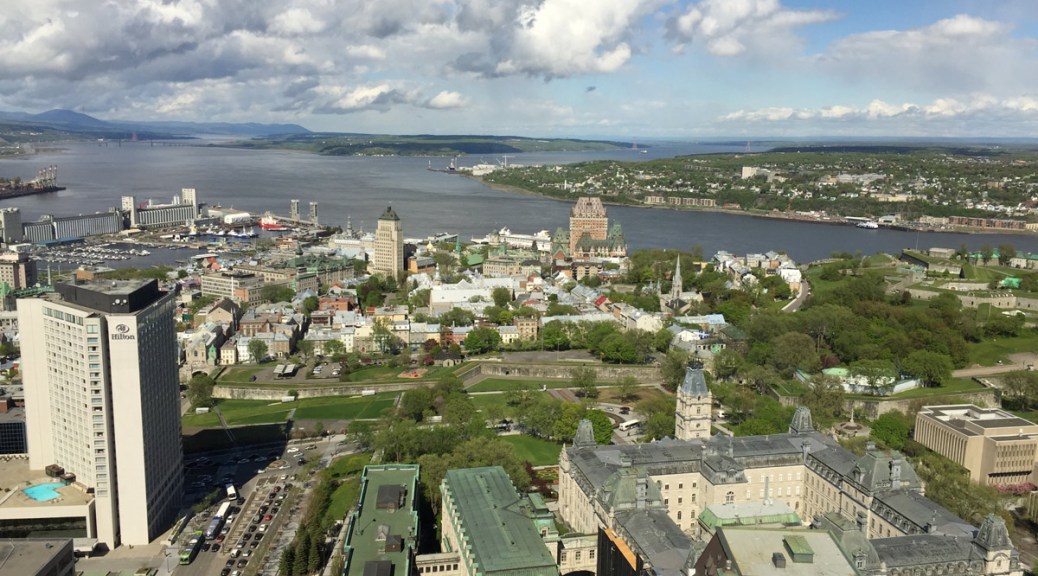 Observatoire de la Capitale – the viewing deck on the 31st floor of the Marie-Guyart Building in Quebec City, Canada – boasts it has “the best view in town” from “221 meters up.”

And they’re absolutely right – the views are spectacular.

To the east, you can see the beautiful and picturesque Old Quebec and the citadel:

Looking a bit to the north, you can get a glimpse of the expanse of St. Lawrence River, the Quebec City port, and the mountain ranges in the distance:

Toward North you can see how far Quebec City and the suburbs stretch out, and the same mountain range extending West

From the windows out toward West, you can get a great view of St. Lawrence River. The oddly shaped building in the foreground is the Hotel Le Concorde Quebec, which houses Ciel! – a revolving restaurant (which unfortunately we have not had a chance to visit).

But the Observatoire de la Capitale is more than just a viewing deck. It also offers you a great tour of the city from up above, and a rich history lesson of the region.

As you walk along the floor to ceiling windows, look for display panels that give you the opportunity to explore in more detail the landscape stretching in front of you.

The touch screen panels with information in French, English, or Spanish, reflect the view below, with blue markers indicating landmarks for which more information is provided, when touched.

From the page about “Fortifications of Quebec,” for instance, you can find out that “Old Quebec is the only inhabited urban neighborhood in North America surrounded by fortifications” and that the first fortifications were started in 1691, at the request of Governor Louis de Buade de Frontenac.

The page about “Place Royale,” on another hand, informs the visitors that this oldest square and marketplace in Quebec City was named “Place Royale” after a bust of King Louis XIV was erected there in 1686.

If you are not in a hurry, take time to sit down in the comfortable, egg-shaped seats along the wall and listen to brief (2 minute) audio stories “told by” Quebec region’s important historical figures, such as the Iroquoian Chief, Donnacona, or the founder of Quebec City, Samuel de Champlain.

There are several of them, so be prepared to spend quite a bit of time there, if you want to listen to all.

In addition to a guided tour from above and the audio stories, the Observatorie also showcases Quebec City’s history in illustrated displays mounted on the walls opposite the windows, which often include not only old photos, but also various “artifacts.”

From one of the displays you can learn that during the winter of 1535-1536, the inside of the ships of seamen accompanying Jacques Cartier was covered in a layer of ice “four fingers” thick and that “without the assistance of the Aboriginals, these Frenchmen would have all died of scurvy during that terrible winter.”

Another panel explains the reason why houses in Quebec City were built of brick with sheet metal roofs – the devastating fires that destroyed whole neighborhoods. To reduce the risk of fire, the houses were built with brick walls and sheet metal roofs.

And yet another board informs the visitors that while in the mid-19th century half of the population worked in the shipyard, toward the end of the 19th century, Quebec City’s industry included clothing and shoe factories and that during World War I, the Lower Town factories produced around 25,000 pairs of shoes a week.

The Observatoire’s web site claims, “By the time the trip is over, you will never look at Québec City the same way again” and they’re right. If you take time to listen to all the stories, and read all the panels, you will get a much richer understanding of the city stretching in all directions underneath your feet.

By the way, the Édifice Marie-Guyart, the building that houses the observatory, is only 132 m (433 ft) tall, but it’s situated in the higher area of Quebec City (Parliament Hill), that’s why the brochure says the viewing deck is at 221 meters – it’s 221 meters above the sea level.

Édifice Marie-Guyart was built in 1972, and the lower floors of the building house several ministries. The observatory itself opened in 1998, and admits around 70,000 visitors a year.

As you leave, (or as you enter), take a look at the rusty cubical sculpture “1=1+1” by Charles Daudelin on the northern side of the building. Quite simple, but also quite striking. I liked it a lot!

On the west side, on another hand, you can see on the next door building “Fresque BMO de la capitale nationale du Québec” – a fresco commemorating Québec City’s political history, which, per “Frescoes and Murals” page on the Quebec City Tourism site “depicts the façade of Québec’s Parliament Building and various individuals who—each in his or her own way—left their mark on the province’s political development.”

Evening or early morning access for groups is available by reservation.

If you want, you can schedule a guided tour, by reservation, though I’m not sure what the cost is. The Thematic Visit mentions “starting at $3.57.”

By the way, you can also book the Observatoire for events. The rates are not listed on their website, so I have no idea how expensive that would be, but it sure would be quite impressive to host a party there!

You can search for the right bus, and the right schedule on the Réseau de transport de la Capitale website.

If you can’t go to the Observatoire de la Capitale in the near future, you can at least see the view through their webcams.

Note the “search | find a point of interest” feature on the right. If you click on that, little blue dots pointing out the most important buildings appear over the image.

By the way, the Office du tourisme de Québec / Québec City Tourism is present on Facebook, Twitter,YouTube, Pinterest, and Instagram. Give them some love by following them! 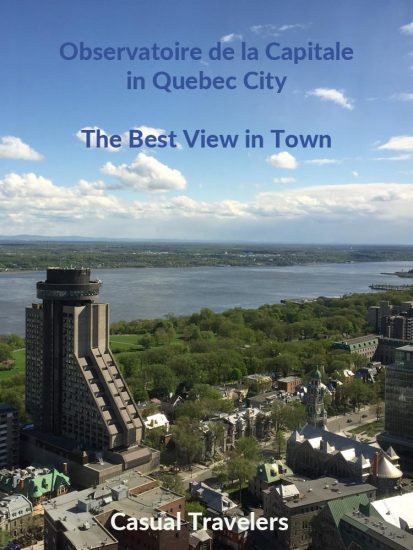