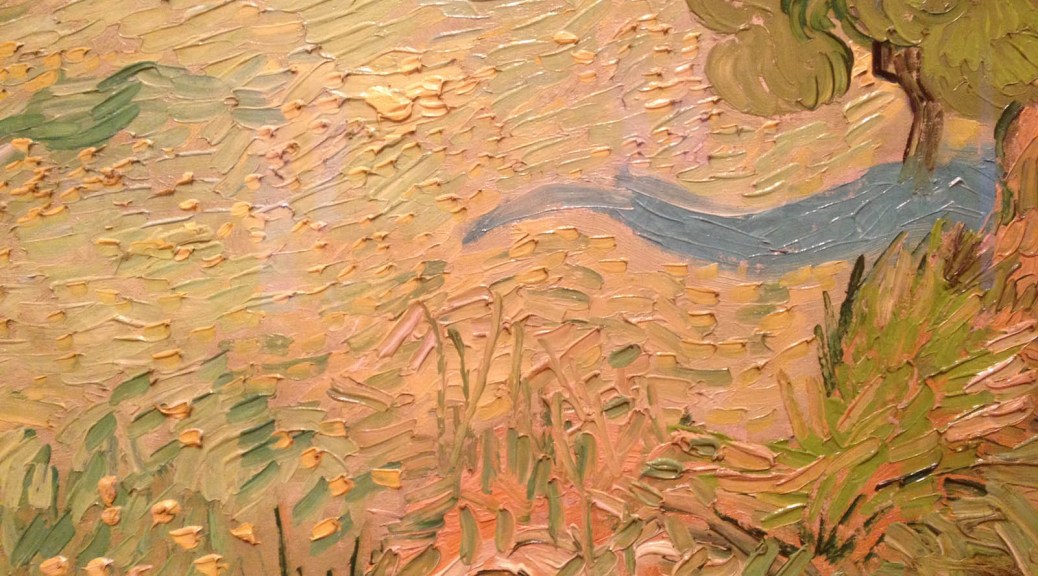 Those of you who have been following museums on Twitter for a while might remember that September 17, 2014 was a #AskACurator Day, organized by @MarDixon.

What is Ask a Curator? It’s a way to talk to curators and people who work in cultural venues you normally don’t have access to.

Basically, the curators from all around the world get on Twitter and answer people’s questions, and if you follow the hashtag #AskACurator you’ll see the full feed of all the questions and answers.

The 2015 #AskACurator day, by the way, will be held pretty soon – on September 16 – so put that date on your calendar if you love museums!

Recap from the 2014 #AskACurator Day

It just so happened that on September 17, 2014 I had a day off, and even though I was planning on going shopping, I ended up spending a good part of the day following the feed, and asking my own questions too, of course. (Because talking about art wins over shopping any day in my book.)

But I don’t mind.

We try to go to museums as much as possible when we travel, and I even have a “museums” category for my posts, but as much as I like to travel, I know that I will never get to visit all of the museums in the world that I’d like to.

Twitter and #AskACurator gave me a way to see the beautiful things the participating museums own and an opportunity to chat with the curators of several museums I have visited in the past, and many others that I may never see.

For instance, the curator of the Museo Nacional Centro de Arte Reina Sofía, in beautiful Madrid, Spain said that the museum now allows photography in every room, except the room that houses the famous painting Guernica, by Pablo Picasso, which surprised me, because we were told not to take pictures there.

The same curator also reminded me the title  of my favorite sculpture at the museum, the Great Prophet by Pablo Gargallo. I mistakenly thought it was titled the Warrior.

(You can read more about this striking piece of art in my post “Learning more about Pablo Gargallo’s Great Prophet.”)

I also got a chance to ask the curator from the Victoria & Albert Museum in London, UK the following question:

What percentage of your collection is on display and how much is in storage?

.@CasualTraveling We display 26% of objects suitable for display, and over 2m objects are available to view in the Study Rooms #AskACurator

For those who have not been to the V&A – it’s a HUGE museum, and if they only showcase 26% of their collection… I wonder what wonderful treasures they have that are not showcased.

(By the way, you can read my thoughts on the V&A collection of period clothing in “Period Clothing at the Victoria & Albert Museum in London,” but that’s just a tiny piece of what this fantastic place has on display.)

In addition, I was very glad I got a chance to talk to curators from the relatively young, but magnificent Museu Thyssen-Bornemissza, in Madrid, Spain whose entire collection you can see online, at wonderful resolution.  I asked them

How long did it take to digitize all of your holdings to post online?

I loved these curators’ answer to another one of my other questions:

What piece do you wish the visitors noticed more?

@CasualTraveling @museothyssen @guillermosolana In fact it’s our wish that visitors find in our collection the piece they dream of — Mar Borobia (@MarBorobia) September 17, 2014

Other museums were more specific (click on the screenshot of the tweet to go to the Museum’s page) when answering this question:

@CasualTraveling @yourAGA We have a pennant carried in the campaigns of 1914 – its looking for attention right now ! #AskACurator — Lancashire Museums (@LMuseums) September 17, 2014 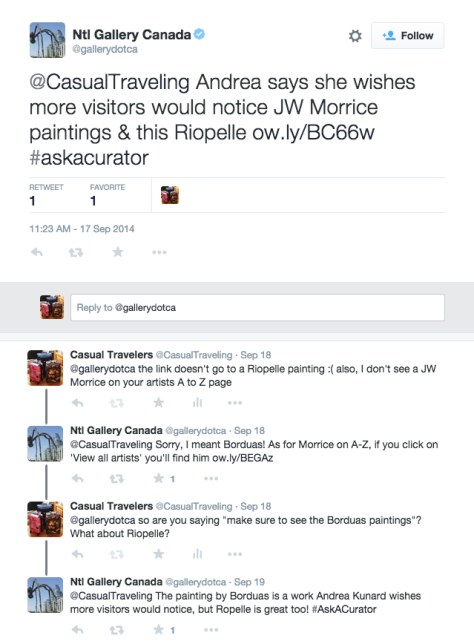 By the way, you can see the National Gallery of Canada’s James Wilson Morrice‘s and Jean Paul Riopelle‘s paintings and a photo of Michel de Broin’s sculpture Majestic online. I did get to see a Riopelle this year – “Tribute to Rosa Luxemburg” – though that was at The Musée national des beaux-arts du Québec

On another hand, the curators at the Universalmuseum Joanneum in Graz, Austria suggested the visitors look for:

@CasualTraveling The original equipment from Rokoko in the 5 State Apartments at Museum im Palais – one of the most valuable outside Vienna! — Joanneum (@Joanneum) September 17, 2014

I admit, I have never heard of the Universalmuseum Joanneum in Graz, Austria before, but a quick look at their pages about the State Rooms, especially the Planetary Room, and does make me want to go there some time. Just click through the image galleries on the “Shining a light on a Baroque world” page, and you will want to go as well.

The curators from the ESSL Museum in Vienna, Austria that holds contemporary art promoted their “young art collection”:

Here are a few more suggestions on what to look for from other curators:

@CasualTraveling All pieces in our collection are very important and each one brings a different story that relates to each individual. — Museu de Arte do Rio (@MuseuArteRio) September 17, 2014

@CasualTraveling “To Touch” by Janet Cardiff, in #90×90. The artist has embodied the stories of a worn table through sound #AskaCurator — ArtGalleryofAlberta (@yourAGA) September 17, 2014

It was also fun to see the curators’ replies to:

Have you ever broken an item?

@erinleitner Curators burst out laughing. “There are prob few in the business that haven’t nearly broken something.” 1/2 #AskACurator — SD Air & Space (@SDASM) September 17, 2014

@erinleitner You’re not a real paleontologist until you’ve accidentally broken a fossil! (always careful, but fossils are fragile!) — The Alf Museum (@alfmuseum) September 17, 2014

@MarDixon @NewRichlandMuse Not a curator but Dad dismantled one of these for coins without realising antiquity! pic.twitter.com/CVZrbUd1hE — Alfred Chow (@Maker_of_Things) September 17, 2014

@MarDixon @NewRichlandMuse I did cause a scratch on the canvas of a painting. Totally mortified I had to phone the conservator #AskACurator — Amy Dale (@amyldale) September 16, 2014

After 30 years I have to say yes. 🙁 @AskACurator: RT @NewRichlandMuse: Have you ever broken an item?#askacurator — The RCA Museum (@TheRCAMuseum) September 17, 2014

@AskACurator @NewRichlandMuse no, but when a student volunteer I dropped a tiny 5000-yr old bead, couldn’t find it. Was probably hoovered up — PetrieMuseumEgypt (@PetrieMuseEgypt) September 17, 2014

@MarDixon @NewRichlandMuse I did cause a scratch on the canvas of a painting. Totally mortified I had to phone the conservator #AskACurator — Amy Dale (@amyldale) September 16, 2014

That question made me ask:

Which piece in the collection breaks the most often?

As you can see, #AskACuratory day is a lot of fun, especially if you love art and museums. If you are interested in reading more of last year’s discussion look for the dozens of recaps on Storify like these:

Thank you to everyone who participated in #AskACurator Day! View the 3 full Q&As on @Storify: http://t.co/yLcYv53WYu pic.twitter.com/YqePjmnWS5 — metmuseum (@metmuseum) September 18, 2014

There are many, many other Storify stories, just as interesting.

If you’re into statistics, Mar Dixon put together some data in “#AskACurator 2014: Building a Community and My TakeAways.”

In closing, again, if you love museums, get your questions ready, and do put aside some time on September 16, 2015, and join the #AskACurator day. I do hope to be able to pop in and ask a few questions as well.

You can see the list of museums planning to participate in Mar Dixon’s “#AskACurator Who To Ask” post.

Can you guess the painter’s name?

By the way, can you guess the name of the painter who created the painting detail from which I used as the featured photo (the photo at the beginning of the post)?

He’s one of the painters whose work has to be seen in person, because reproductions just don’t convey the genius of his work. 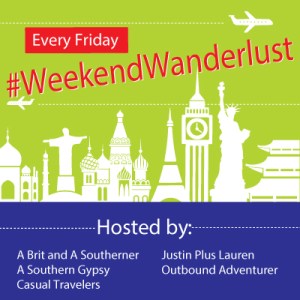