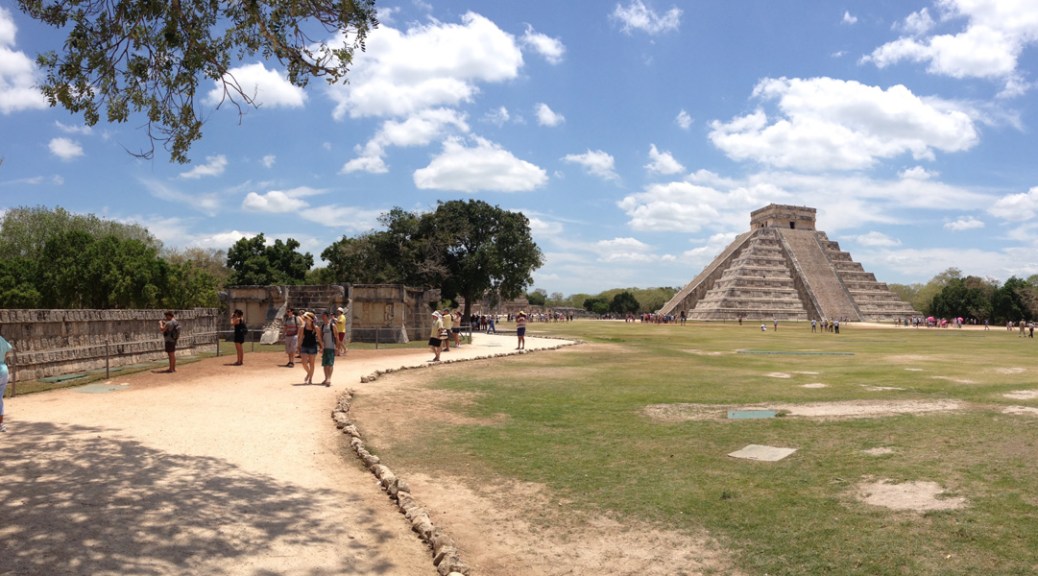 Chichén Itzá’s significance and population started to decline since the middle of the 13th century, as nearby Mayapan gained importance as the seat of the local power.

As a “masterpiece of Mesoamerican architecture” and “the most important archaeological vestige of the Maya-Toltec civilization in Yucatan,” Chichén Itzá was added to the UNESCO World Heritage List in 1988.

What can you see at Chichén Itzá?

As mentioned above, Chichén Itzá is not a single building but a whole city, still being excavated. The whole area covers about 4 to 6 square miles (10 square km), and visiting involves quite a bit of walking, so wear comfortable shoes when you go there!

Here are a few highlights of what you can see:

The pyramid shaped Temple of Kukulkan (the feathered serpent god), also known as El Castillo, is probably the most famous structure at the site.

There are also 52 recessed panels on pyramid’s sides.

Unfortunately the steps are no longer open to the public. I had heard it was quite a climb, without a rope or a banister to hold on to!

A giant head of Kukulkan adorns the foot of the staircase facing north, and the temple was built exactly so that twice a year, at both Spring and Autumnal Equinox, as the sun sets down, the right-angle edges of temple’s platforms cast a shadow onto that staircase, creating an illusion of a snake slithering down to the ground from the top.

Must be quite a sight! Sadly, we visited in April, so we missed this magical moment.

You can see it happen in Jose Antonio Ariztegui‘s video “Equinox at Chichen Itza” starting at 2:27

You can also see photos of the illuminated serpent in “Shadows and Ghosts – Looking for the Descent of the Feathered Serpent at Chichen Itza” by Landlopers.

Do you see a vertical stone circle placed high on the wall on the right in the photo below? Imagine having to direct a rubber ball through that hoop using only your elbows, knees, or hips!

The ball games the Maya played in this place was not just for entertainment, however. Those games were ritualistic, played sometimes for two to three days, and, I’ve read, the captain of the losing team or perhaps even the whole losing team was sacrificed afterwards. Talk about high stakes!

Tzompantli – The Wall of Skulls

Tzompantli is an Aztec word, not Mayan, and means the wall of skulls. The Chichén Itzá structure named Tzompantli is rectangular in shape, 65.5 yards (60m) by 13 yards (12m), and its walls are adorned with carvings of skulls representing the skulls of victims sacrificed to the gods, and of eagles and feathered serpents devouring human hearts.

You can see the long, narrow wall of skulls in the featured photo at the top of the post as well.

Platform of the Tigers and Eagles

Right next to the Wall of Skulls is the platform of the Tigers and Eagles, sometimes also called a Temple of the Eagles and Jaguars.

It’s a small, square shaped platform with stairs on each side, and feathered (or plumed) serpent heads at the end of each balustrade, that are typical of the Toltect style. The panels on the walls show eagles and tigers with human hearts in their claws, which is a reference to the military orders of the Eagles and the Tigers who captured war prisoners later sacrificed in religious ceremonies.

Observatory or El Caracol (The Snail)

The building named The Snail (El Caracol) was an observatory built by the Maya astronomers whose knowledge of sky at that time far surpassed anything the Europeans knew.

Two windows in the tower line up with Venus’ most northern and southern setting points, while the corners of the Observatory’s platform align with sunrise during the summer solstice and sunset during the winter solstice.

The building is called The Snail because inside the cylindrical tower is a spiral stairway to the observatory area.

The Snail is one of the buildings in from before the Toltec period, built before the structures mentioned above were erected.

The building called the Church is also older than the Temple of Kukulkan, and dates back to the 6th or 7th century. It was called the Church by the Spaniards because it stands close to two other buildings they called the Nunnery and the Annex, which were supposedly religious monuments.

The walls of the Church are adorned with the masks of the Rain God, Chac, and four Bacabs, an armadillo, a snail, a turtle and a crab, who supposedly hold up the sky together.

Hours, Tickets & Where to Stay

Chichén Itzá’s official website seems to have most of the information only in Spanish, with just a few pages translated into English.

The site is open from 8am to 5pm, and I’m afraid it’s hard to find information how much it will cost you to get in if you want to go visit it by yourself and not part of an organized tour.

The website says access is 64 pesos (mere $4 US), but also mentions that the State Government of Yukatan charges an additional fee. Looking at the tickets I saved I can see those cost 125 pesos ($8 US) for each adult, and mere 6 pesos for the kids. Quite a bargain.

When we visited, however, we came as part of an organized bus tour run by Experiencias Xcaret, because we were staying in  Cancun, at the Royal Carribean.

While the whole trip was quite pricey – $109 US per person – in addition to the entry fee to Chichén Itzá the tour also included transportation in a comfortable, air conditioned bus, breakfast and drinks on the bus, waters and umbrellas during sightseeing, a buffet lunch at a restaurant, the entrance to the Ik Kil cenote, and two devoted tour guides that gave us a wonderful overview of the history of the region while we were on our way and back. All in all, since none of us speak Spanish, I very much appreciated being taken care of on this trip, rather than trying to figure out by myself how to get there, how to buy the tickets, and all that.

If you don’t already have accommodations for your trip, you can search what Booking.com has to offer in and near Chichen Itza.

As mentioned above, Chichén Itzá covers quite a large area, so I’d advise you to wear your most comfortable shoes when you visit.

Also, because average temperatures in Chichén Itzá  are around 93ºF (34ºC) year round, I suggest you dress light, put on plenty of sunscreen, and have everyone in your family wear a hat, preferably one with a wide brim.  Both grown ups and the kids will appreciate sunglasses as well.

Most of all, make sure to have plenty of water, especially if you are not coming on a bus tour that provides you with plenty of drinks and umbrellas.

If after reading the above you’re still not sure whether to visit Chichén Itzá, take a look at a few other posts about this fascinating place:

“Private tour to Chichen Itza, Ik Kil and Ek Balam” by We Travel Together

“Chichen Itza – One of the 7 world wonders” by Deafinitely Wanderlust

More about the Pre-Columbian Sites

Last, but not least take a look at the gorgeous photos Cape Coconut posted in their “Mexico | Top 7 Ancient Civilizations Ruins.” Fascinating that all those places were built when most of the European cities weren’t even established yet.

Also, don’t forget to join the #WeekendWanderlust chat on Twitter, every Saturday, at 11am EST, 3pm GMT, 11 pm SGT. You can see the list of our other upcoming topics on Travelogx.

29 thoughts on “Visiting Chichen Itza: An overview and tips for visiting”