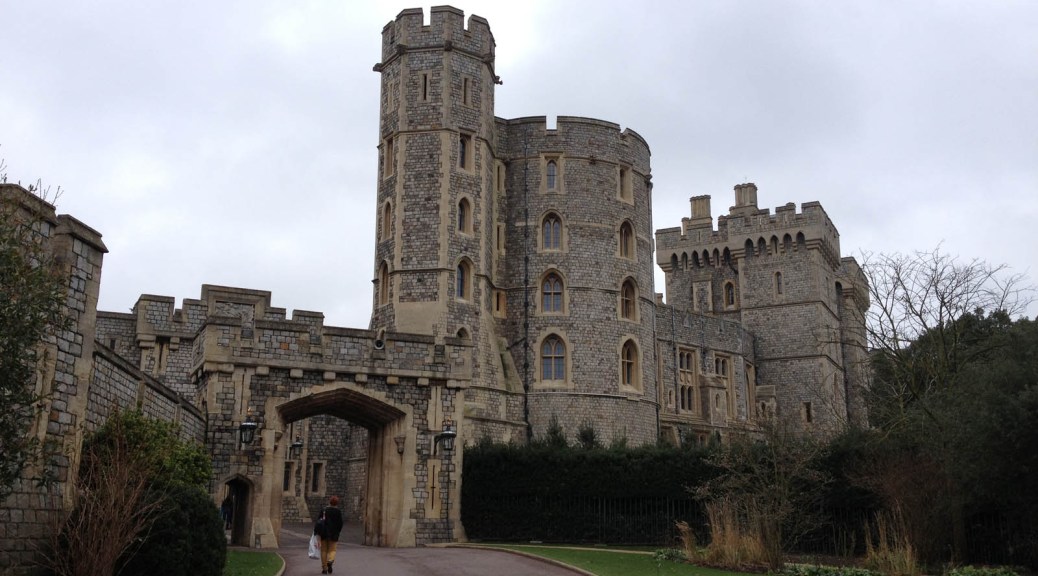 If you are staying in London and want to visit the Windsor Castle,  word of advice – make sure the state apartments are open on the day you’re visiting!

When we went there in January 2013, the state apartments were closed and even though it was still thrilling to walk around the place built by William the Conqueror, and where Henry VIII and Queen Victoria lived, the only “indoor” place open to the visitors was Queen Mary’s Doll House, Royal China exhibit, and a photo exhibit, The Queen: Portraits of a Monarch.

Not that the Doll House was not worth looking at. It was pretty spectacular. And we were able to do the Precincts Tour – tour the grounds with a guide who was very knowledgeable about the history of the Castle, and was very patient with our questions, but I really wish we saw the inside as well. Maybe next time…..

Until then, the “official” video about the Castle will have to do.

As a consolation prize, I  bought  myself Buckingham Palace: The Official Illustrated History at one of the Castle shops.

By the way, each of the three Castle shops offer different things, so if you see something you might want to buy at one of them, just get it, because they may not have it at the other ones. But then again, you can probably also buy it online.

The Precincts Tour takes you around the grounds of the Windsor Castle, though you will not be able to enter into the Quadrangle. You can only peek at it through the gate.

“The Official Website of The British Monarchy” states that “Foreign Heads of State enter the Castle in horse-drawn carriages through the George IV Gateway into the quadrangle in the Upper Ward, where a military guard of honour is drawn up.”

Lucky are the scouts who are allowed to participate in the Annual St. George’s Day Parade of Queen’s Scouts! Must have been quite exciting to be there.

After peeking at the Quadrangle, you will then take the circular route around the garden, attractive even in January.

Make sure you pay attention to what the guide is saying when you get to the Norman Gate, so that you know what the round holes in the gate were for!

After crossing through the Norman Gate, you will enter the North Terrace, from which you will have a spectacular view of the countryside. I found it quite thrilling to walk on the stones where Queen Elizabeth I walked centuries ago.

Even if the State Rooms are closed, you can still visit St. George’s Chapel, and see the tomb of Henry VIII and several other kings and queens. Unfortunately, taking photos is not allowed inside, so I only have a few photos of the outside.

Getting to Windsor Castle from London

You can get to Windsor Castle from London on public transportation.

We traveled from Embankment to the Windsor & Eton station, and in January 2013 the adult price for the round trip was £23.40 and child price was £11.70. That covered getting in at Embankment, switching at Waterloo, and taking the train to the Castle.

I do hope that was cheaper than taking a cab, but after reading “Windsor: Traveling to Windsor by Rail from London on TripAdvisor” I’m thinking it might have been a more expensive and a longer way to travel, plus as the TripAdvisor article says, the walk from Eton Riverside is up a steep hill. (We didn’t mind the hill much, though.)

Do some research on your own on the best way to get there, if you’re staying in London.

More information about the Windsor Castle

You can see my photos from Windsor in my Flickr Windsor Castle album. Tim Dreese’s  blog post One Day at Windsor Castle, Windsor, United Kingdom also has a few nice shots from the town surrounding the castle.

8 thoughts on “Tips on Visiting the Windsor Castle: Make sure the State Rooms are open!”