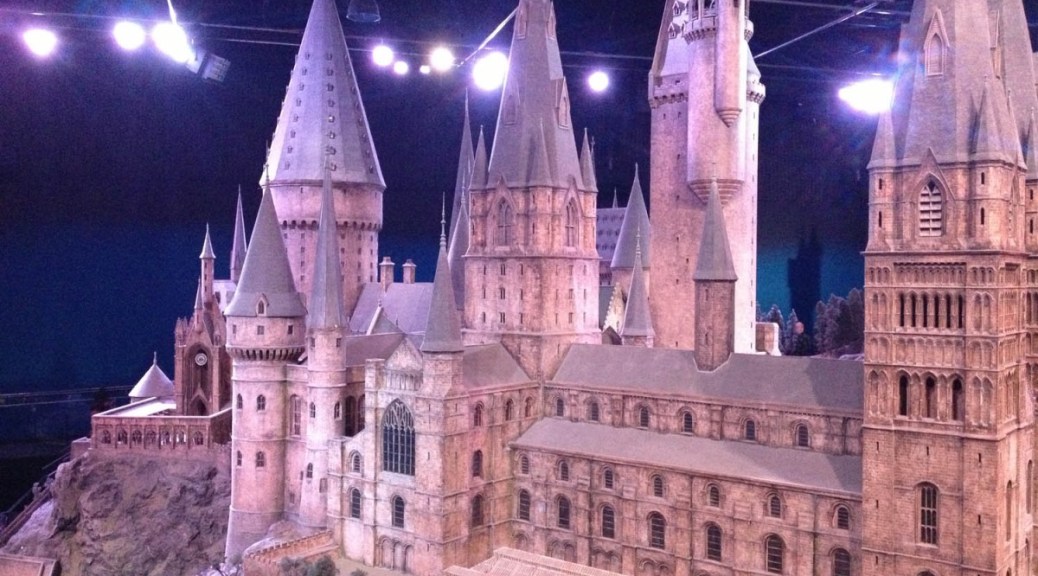 The most important thing you need to know about the Harry Potter  Studio Tour (technically called “Warner Bros. Studio Tour London“) is that, as their home page says in print that really should be bigger,

“Tickets must be purchased in advance. Tickets are not sold at the Studio Tour.”

You cannot show up and expect to buy a ticket on site.

So yes, buy in advance, and choose the entrance time as early as possible, because if you love the Harry Potter movies, you will spend hours and hours looking at all the sets, the props, and reading all the display boards explaining everything.

And mind you, if the only day you can go is the weekend, book the tickets as soon as you know you’re going. The weekends sell out fast.

You can get there with a bus tour operator, but those are rather pricey, so we opted to try an adventure and get there by train and then a two-story “Knight Bus” from the station, following directions posted in “Leavesden: Warner Bros. Studio Tour London” on TripAdvisor.  Just remember that London Euston is a pretty big station, so make sure you’re at the right platform when you get there. (It turned out we weren’t so if we were running late, that would have been bad, because we had to go to a different level.)

When you get your tickets, you’ll have to wait until your entry time. You’ll be going through two rooms that are showing promotional movies, but then, at the end of the second one, the screen lifts, and everyone gasps as they see the entrance to the Great Hall behind it.

The Great Hall is the only room where you’ll be accompanied by one of the enthusiastic guides the studio hired – she (or he, but we were guided by a young woman) will point out several things in the Great Hall, including the score counter for the Houses, which I completely overlooked in the movie.

There will be many things you’ll notice during the tour that you had not noticed in the movies before; well, unless you’re Sherlock-observant, that is.

If you’re like me, after you get home you’ll want to watch the movies again just to find those particular objects or scenes, and say “Oh, right…” and “How could I not have noticed it before?”

After you leave the Great Hall, you’re on your own, your visit is not timed and you can take as long as you want.

The main attraction of the tour are, of course, the original movie sets, including:

There are several more sets at the studios, but these are the ones I have best pictures of, that’s why I’m mentioning them.

In addition to the original movie sets, there are thousands of props all around, some on display, some “fenced off.”

I think my favorite prop display, aside from the wands, all neatly labeled, and the wigs, was a hanger with four jackets that Daniel Radcliffe wore in “Harry Potter and the Deathly Hallows,” showing increasing amount of tear, because they were worn at different points in the movie and had to reflect not only regular “wear and tear,” but also look like they’ve been through battle.

In another section of the exhibit you can also see the automated Hagrid’s head, as well as several Goblin masks, and the insides of the Monster Book, the Mandrakes, and many other mechanized objects.

Yet another part of the exhibit features extremely detailed drawings and models created before the sets were built.

My absolute favorite was a large painting of Doby. Look for it when you visit! It’s spectacular!

The drawings and the models may be not as spectacular as the actual sets, but still, these drawings and models help you realize what a huge undertaking these movies were, and just how many people worked on them.

By the way, did you know that many of the portraits in the hallways were of real people working on the movie? One of the displays explains who is in which painting.

There are display boards like the one above throughout the whole exhibit, by the way, explaining various details, and that is the main reason I said that if you love the movies, you will spend hours at the studios, because you will want to read each and every single one of them.

I took photos of a few of them at the beginning of the tour, with the intention of reading them all later, but there were just too many of them, and the kids were getting impatient. I guess I’ll have to go there again some time, maybe when the kids are bigger.

The last part of the exhibit is a large scale model of Hogwarts which apparently was used in the movie and enhanced by CGI.

After exiting that area, you’re in the shop, of course, and yes, things are pricey, but we did splurge for a “real” replica of Hermione’s wand (just don’t ask me how much it cost).

All in all, if you love the movies, the Harry Potter studios are definitely worth visiting if you’re in the area. You won’t see this collection anywhere else!

And don’t just take my word for it.

Lisa Goodmurphy says the same thing in her post “Experiencing the Magic of Harry Potter at Warner Bros. Studio Tour London” on her blog, Gone with the Family: Adventures in Family Travel. Her excellent post is actually much more detailed than mine, but I do have some photos that she doesn’t. 🙂

Mixed Nuts: Our Blended Family’s Crazy Life calls it “crazy amazing” in her post “Day 3 – London” which has a TON of photos from the studios.

WorldTravelFamily said: “It’s not cheap and it was a 4 hour drive through terrible traffic on a cold, wet January day, but was it worth making the trip to the Warner Bros. Harry Potter Studios Tour just north of London? You Bet Harry Potter Was Worth It!” in their “Harry Potter Magic Harry Potter Studio Tour UK” post.

And The Danish Canadian admitted “when I finally saw the Warner Brothers Studio as we pulled into the parking lot, I surprised myself as I could feel some tears. No, I didn’t end up crying, but I was very overcome with emotion. This is something I had wanted to see for the past two years, and it was finally happening!” in “Warner Brothers Harry Potter Tour London.”

By the way, if you want to see more of our photos, there are a LOT more on our Flickr photo album from the Harry Potter studios.

If you’re planning a visit to the UK, you are more than welcome to take a look at our other articles about the UK, and follow our UK and UK | London Pinterest boards.

Where to Stay in Leavesden?

I’m not sure if you’d like to stay in Leavesden, really.

However, if you’re looking for a place to stay in London, you have PLENTY of options to choose from. Take your pick!