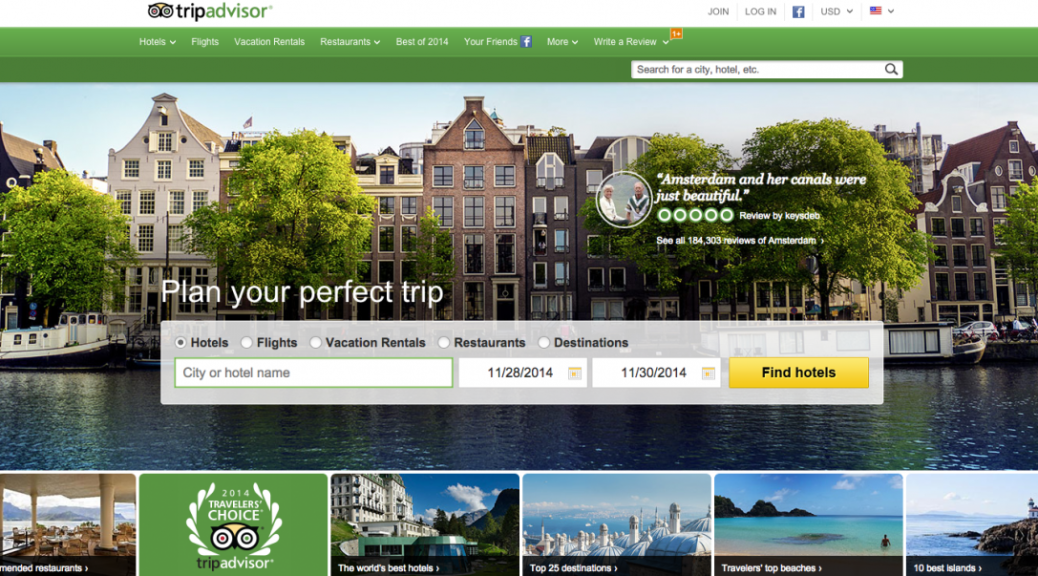 This blog post is an assignment for a Social Media and Analytics class I’m taking (“write about an influencer in your industry”). Feel free to skip it, unless you do want to learn a little bit about the history of TripAdvisor, which is interesting, actually.

I feel like Dudley Dursley telling Mr. Mason, “We had to write an essay about our hero at school, Mr. Mason, and I wrote about you.” when I say I can’t imagine traveling without TripAdvisor, but it’s true – we consult TripAdvisor every time we are planning a trip.

I remember stumbling upon the TripAdvisor site years ago, when it was still in its infancy. There wasn’t much to it, and I think it was even before they had text ads.

Back then TripAdvisor was still just a travel search engine that Stephen Kaufer and Langley Steinert  built after Kaufer “could not find any place on the internet to get the real story about places he wanted to visit with his wife.”

“Reviews of hotels and attractions?” I thought after looking at the site, “What a brilliant idea! But… what is their business model? How are they going to make money on that?”

But they did make money, quite a bit of money, actually, because once the site started including text ads next to the search results, the site’s click-through rates – rates of how often the visitors clicked on those text ads – turned out to be much higher than the industry average of 0.2%.

When visitors  saw ads for hotels appearing next to search results about  the locations they wanted to visit, a whole 15% of them would click on the ads, presumably to look up room rates. And every time a TripAdvisor visitor clicked on a link to a hotel, to book a room, the hotel had to pay TripAdvisor for that click.

Little by little, those clicks added up.

In March 2002, TripAdvisor turned a $70,000 profit, and the “clicks” are still the major source of revenue for the company, as I understand.

Interestingly, “Kaufer originally hired editors to comb the Web for great travel articles and link to them” but then added an option to add reviews on the site, and it turned out the site’s user reviews were the first thing the visitors read.

Basically, TripAdvisor allowed people to tell others about their travel experiences before there was Facebook and Twitter, and people did it happily, and for free. This fresh, authentic content, that did not cost the company a dime to produce, was TripAdvisor’s ticket to success.

Naturally, and not surprisingly, in the beginning hotels and restaurants were very wary about the frankness of the reviews on TripAdvisor, since people who received poor service did not hesitate to tell others about that.

But, as Kaufer said, “Our policy is, the customer stayed there, so they get a chance to voice their opinion. But that’s why we have always offered the management a response capability, so they can tell their side of the story.”

Ultimately, Kaufer believes, “the explosion of online customer reviews has pushed the travel industry to increase quality, and has allowed the best properties to achieve the success they deserve.”

Fast forward a few years, and in 2004 Expedia/InterActive Corporation bought TripAdvisor for $210 million in cash.

A few years later, in August 2008 TripAdvisor bought another Massachusetts fledgling company called FlipKey, which allowed travelers to find rentals, instead of hotel rooms. FlipKey is now fully integrated with the TripAdvisor search engine, and we use it a lot.

Today, according to Alexa.com, TripAdvisor ranks 203rd in global popularity,  and 85th in the U.S. From among other travel companies, only booking.com ranks higher (100th) worldwide, but in the U.S. TripAdvisor is clearly the leader in the industry. Only 40% of visitors “bounce” or leave TripAdvisor without clicking to another page. The rest spend on average 4:20 minutes on site.

Since going public, the company trades on the NASDAQ and is worth over four billion dollars. Not bad for a company that’s barely over ten years old.

I admit, I have not heard of most of them, actually, but TriBod, which connects “the traveller with a trusted and vetted local person who could advise them on putting together their perfect itinerary in a responsible and ethical way,” and TravelPod, which allows people to create free travel blogs, seem quite interesting.

And yes, we do leave reviews on TripAdvisor as well. So far, 2 out of our 5 reviews got “helpful” votes. I hope the numbers will increase, because just as we found other people’s reviews helpful, we want to be helpful as well.

2 thoughts on “It sounds corny, but I can’t imagine traveling without TripAdvisor”