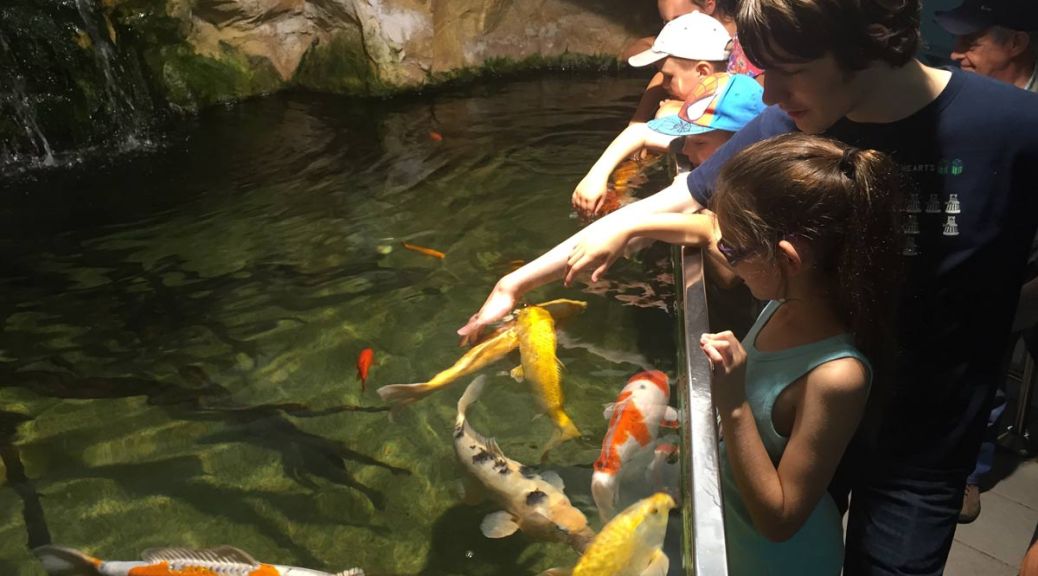 The shape of the building that houses Haus des Meeres (House of the Sea) in Vienna, Austria, looks like an odd choice for an aquarium and a zoo – a rectangular box of concrete with a tent-like green house on one side, no windows on the other three sides, and circular platforms sticking out on all sides from the roof deck.

That’s because the building was repurposed – it was originally an anti-aircraft and gun tower during WWII, with a radar that could be lowered into the concrete tower and protected. The round platforms on all four sides on the roof deck was where the aircraft guns stood.

The idea of turning the building into an aquarium came about in the 1960s, and now the top deck offers great views of Vienna and the surrounding hills, and the 4,000 square meters, or 43,000 square feet of floor space inside house aquaria, terraria, and an aviary.

If you do visit this place, I would suggest you do what we did – take the elevator all the way to the top, take some photos on the terrace, then work your way down.

What can you see at Haus des Meeres in Vienna?

In Hammerhead Shark Tank you’ll see not only hammerhead sharks (which are rather difficult to photograph, because they swim so fast), but also other fish.

A two-story shark aquarium and other salt water tanks, big and large, house fish, crustaceans, and other interesting sea creatures:

At the tropical aviary you can see tamarins, free flying birds, and bats:

Do pay attention to tubes running down the walls – those are part of the leaf cutter ant habitat and the tubes stretch across a couple of floors:

The photos above are just a shapshot of what you can see at Haus des Meeres. There are also tarantulas, sea horses, and many other interesting animals. It’s hard to photograph them all!

I know some people believe the animals should not be kept in captivity, but the aquarium had many displays throughout teaching about the ecosystems of the animals on exhibit.

As one of displays at the entrance said:

“Key functions of a modern zoo are to inform the public about the threats facing individual species or entire ecosystems as well as to breed endangered animals. These efforts are promoted with the help of international captive breeding projects, which involve cooperative efforts by zoos from across Europe. The Haus des Meeres, for example, keeps two studbooks – o blue-spotted stingrays and goodeids – and participates in projects involving seahorses, cotton-top tamarins, giant girdled lizards, Malaysian giant turtles, and Asian giant tortoises.”

Since both kids like animals, I wasn’t surprised both of them gave Haus des Meeres thumbs up. What did surprise me was the fact that my thirteen-year-old enjoyed petting the fish so much (and for so long). He said they were scaly, but not slimy. (You can see the photo of the kids petting the fish in the featured photo at the beginning of the post.)

The zoo part of Haus des Meeres is open 9am to 6pm, but last entrance is 30 minutes before closure time, so be there by 5:30pm at the latest. Mind you, half an hour will not be enough to see this place properly. Best put aside at least two to three hours.

Adult tickets are €15.80, and that’s comparable with other aquariums this size we’ve seen. Haus des Meeres – Aqua Terra Zoo is a non-profit organization and their activities come entirely from entry fees and profits from the cafe and shop.

Haus des Meeres is located at Fritz-Grünbaum-Platz 1, close to the orange U3 U-bahn (subway) station “Neubaugasse.” The green U-4 Kettenbrückengasse stop is not too far either.

We want to thank the Vienna Tourist Board and Haus des Meeres for hosting our family at this fascinating place. While we received free tickets, we did not receive additional compensation and the text, format, and opinions are our own, as always.

Where to Stay in Vienna

When we visited Vienna, we stayed at a vacation rental, because that’s what we like to do (review coming soon). All in all, there are plenty of rentals, hotels, hostels, and B&Bs in Vienna to choose from. Take your pick!

21 thoughts on “Animals in the Gun Tower: Haus des Meeres in Vienna”