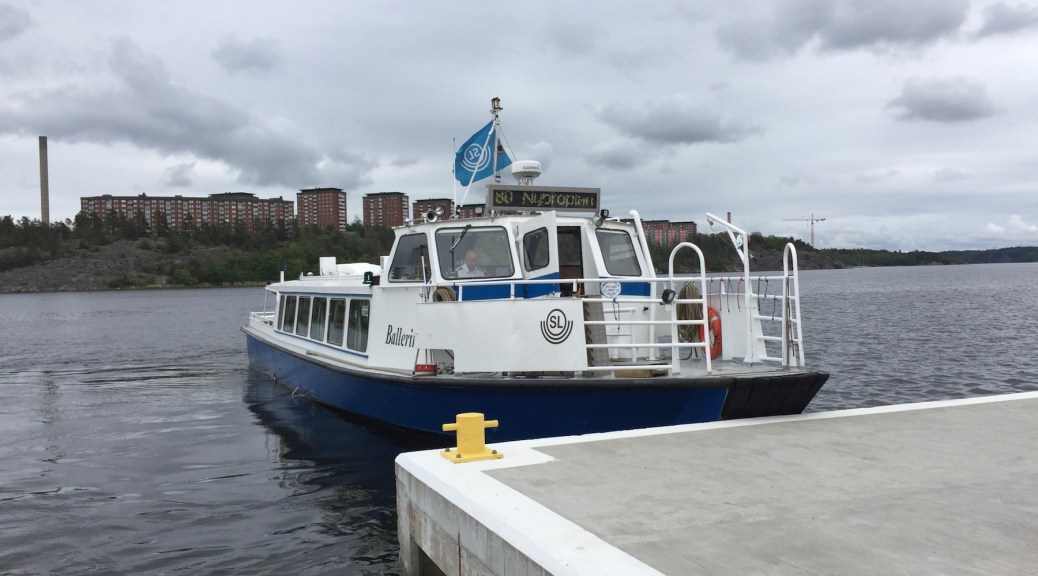 2) Route 82 – which runs between Stockholm Slussen Kajen (in the Gamla Stan area, just south of the Royal Palace – Kungliga slottet) and Stockholm Allmänna Gränd Brygg (on the Djurgården island, right next to Gröna Lund Amusement Park and the ABBA museum), with a stop at the Skeppsholmen island in between. It’s a really short route – the total trip is just under 10 minutes.

3) Route 83 – which runs between Strömkajen, right across the bridge from the Royal Palace – Kungliga slottet, and several islands to the northeast – Orminge, Lidingö, a tiny island of Granholmen, Vaxholm, all the way to Grenadjärbryggan on Rindö Island.

I am really sorry this route didn’t exist when we visited Stockholm in May 2019, because it looks awesome and likely offers many spectacular views and stops at places that are bound to be very picturesque. If we ever go back to Stockholm, we will have to try this route and maybe even make it a day with getting off at as many stops as possible! According to the timetable it looks like one-way trip takes 1.5 hours.

There used to be another ferry route – 85 – but apparently it has been suspended (per sweetsweden’s blog post “Your Guide to Public Transport in Stockholm“).

There are other ferries operating out of Stockholm, but as far as I can tell these routes are the only “shuttle” ferries that accept public transportation SL cards.

You can see a photo of the outside of the ferry at the beginning of the post. Mind you, most of the time the ferry arrives at the dock, lets people off and on, and then leaves immediately, so be at the stop a few minutes ahead of time, just in case. We did see a few people “stranded” because they missed the ferry by less than a minute.

We were lucky in that we just happened to be at the stop five minutes before the boat arrived. N

Inside, there are several pretty comfortable, upholstered and padded benches with tables.

There is a small deck outside in the back of the boat, if you’d rather be out in the open to take photos.

What can you see from the ferry?

As the ferry leaves the Nybroviken bay, you can see from the water the surrounding houses and a variety of boats of different sizes docked in the bay. You are also likely to pass another ferry boat.

As you get to the Allmänna Gränd Brygg stop, where both 80 and 82 stop, you’ll get a glimpse of the Gröna Lund amusement park on the island of Djurgården.

If you’re on ferry route 80, you will pass on your right, but won’t stop, at the small island of Skeppsholmen, with Moderna Museet, one of Europe’s leading museums of modern and contemporary art, and ArkDes, Sweden’s national centre for architecture and design that includes a museum.

Just south of Skeppsholmen, connected by a bridge, is an even smaller island of Kastellholmen, with medieval-looking Kastellet on top of the hill. Kastellet dates back to the 1660s, but the current structure was built in 1848, and is nowadays a function space for events and conferences.

As you’re passing between the Saltsjöqvarn stop and Finnboda hamn brygga, in the Henriksdal area, you’ll pass a large brick structure with copper roofs and a spire in the middle. That’s actually a retirement home – Danvikshem – built in early 1910s.

From then on, you’ll see more modern-looking buildings, like the one below.

Nacka Strand is the last stop on the southern shore, and from there you can see an unusual fountain, called God, our Father, on the Rainbow, by Sweden’s famous sculptor, Carl Milles, designed in 1946 for the United Nations in New York City, where it was supposed to stand right on the East River. However, due to lack of finances, the sculpture fountain was not built as originally planned. The 18 meters (60 ft.) high sculpture in Stockholm was built in 1995, but Carl Milles, who passed away in 1955 never got to see it.

You can see a small model of the same sculpture, as well as many others, at the Millesgården, a museum that includes the artist’s home, an antique collection, a vast sculpture garden, and an art gallery, located on the island of Lidingö east of Stockholm.

One more stop, and you’ll arrive at the Frihamnen terminal, where you can visit the Möbeldesignmuseum, museum of furniture studies, and then head back to Stockholm center on the next boat, unless Frihamnen is where you get off, like we did (because we stayed at an AirBnB apartment located not too far from there).

Hope you found the above useful. Let me know in the comments what you think. Thank you for reading.

One thought on “Stockholm from the Ferry – Route 80 – Nybroplan – Frihamnen”