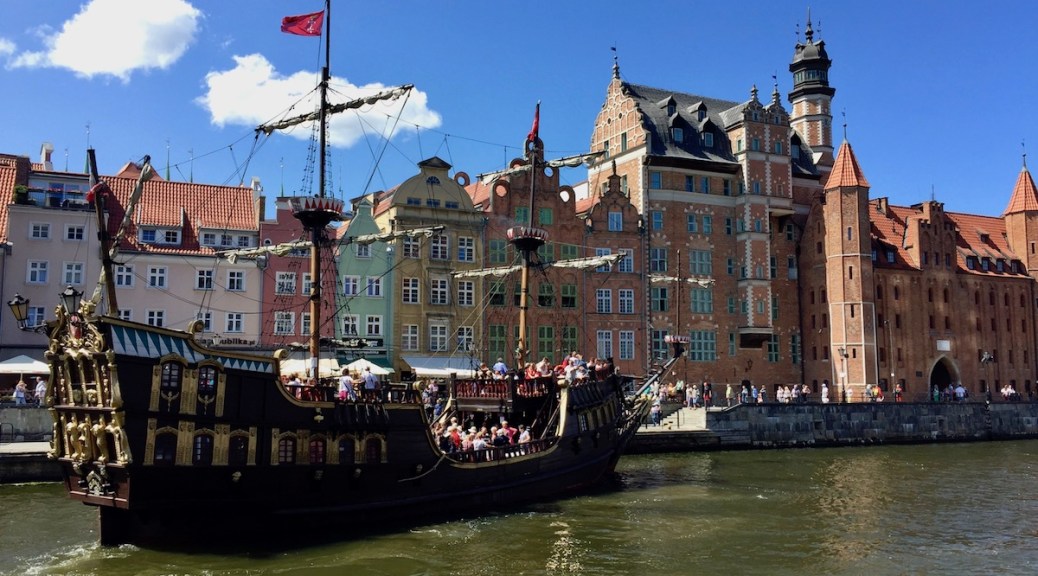 “Where would want to live, if you had to (wanted to) move somewhere else, and why?”

I was recently asked this question in a networking group that was supposed to help the participants get to know one another better.

It’s not where I grew up (that would be Warsaw, Poland), and I’ve only spent two days in Gdańsk proper, once in 2016 and once in 2019, but I know I would love to live close to the Baltic sea and beaches, and also within short distance of this charming, historic town.

Gdańsk is supposed to host Women in Travel Summit in September 2021 (it was supposed to happen in September 2020, but was cancelled because of the pandemic), and I hope my fellow female travelers will decide to visit this beautiful town, because it definitely is worth seeing. Unfortunately I won’t be able to go, since I’m planning to travel elsewhere in August. (I attended just one Women in Travel Summit – in 2015 in Boston. I had a blast and I hope to do it again some time.)

The featured photo above was taken in one of the most touristy areas – Długie Pobrzeże = the Long Strand, and shows one of the ships that are part of the Galeony sightseeing tours.

One of the most photographed buildings on Długie Pobrzeże is Brama Żuraw – a 15th-century brick Waterfront Crane towering above the canal, that nowadays houses the National Maritime Museum. Visit the Crane virtually to see what it looks like inside.

Here’s another shot of the Crane showing more of the Strand.

Not too far from the Crane is Mariacka Street worth visiting for its interesting, ornate water spouts and a multitude of amber stores. If you’re shopping for amber, you’re likely to spend here several hours and hundreds if not thousands of złoty (Polish currency). The jewelry is gorgeous, though.

Another place usually packed with tourists is Długi Targ (Long Market street) together with its famous Neptune fountain, Town Hall (Ratusz), and beautiful, ornate, and colorful buildings surrounding the area.

By the way, right across from the Town Hall (Ratusz) is this pretty building in the photo below, now housing a tourist bureau, that apparently offers guided tours in lots of languages (German, English, Russian, Frech, Finnish, Swedish, Norwegian, Danish, Italian, Spanish, Croatian, Serbian, Hungarian, Chinese, and Japanese) but for some unexplained reason their site is only in Polish.

Here’s a better shot of the Neptune Fountain, dating back to 1615. It was saved from destruction during the WWII because its individual fragments were hidden out of Gdańsk, and it returned to Długi Targ in 1954.

And here’s a better shot of the Town Hall (Ratusz), built around the first half of the 14th century, now housing a historical museum – Muzeum Gdańska. If you’re up to climbing some two hundred steps, you can visit the 80 meters tall tower and see Gdańsk from up above.

Take a look inside the Town Hall thanks to this virtual tour.

You can get a nice shot of the Town Hall from Złota Brama (Golden Gate) at the end of pedestrian Długa (Long) street, full of stores and beautiful buildings.

Złota Brama (Golden Gate) is actually a pretty building from the 17th century. Here’s a view from the western side. Obviously the golden decorations are much more striking on a sunny day.

As you’re wandering around the old city, don’t miss the corner of Tkacka (Weaver) and Piwna (Beer) streets where you can see the gorgeous 17th-century Wielka Zbrojownia (the Great Armory).

Not all of the buildings in downtown Gdańsk are old, but I like how even the newer buildings in Gdańsk, while not as ornate as the old ones, are nevertheless designed to “fit in” with the character of the city.

By the way, that white building on the left might look plain in the distance, compared with its neighbors, but it has this gorgeous, one of a kind door. The whole ground floor of those buildings is a pharmacy, so I’m not sure if the door is actually still used, but it sure is striking.

You can get a nice view of Gdańsk from the observation wheel, Amber Sky, located on Ołowianka island.

However, if you don’t mind walking, you can also get a nice view from Bastion Żubr (Bison Bastion) – one of 14 bastions in the southern part of the old town from the early 17th century.

By the way, as you’re heading toward the Bison Bastion, you might see some kayakers enjoying Gdańsk views from one the canals

On the way back to town, take a slightly different route, to see Brama Nizinna (Lower Gate) built in 1626 …

For more photos from this beautiful city hop on the Instagram feed of the official Gdańsk tourism office.

Hope you can see now why I like Gdańsk so much! Though I probably wouldn’t want to live in the city proper, but rather closer to the beaches about 10 km (7 miles) away.

Both times when we visited Gdańsk, we stayed closer to the beach, not in the city proper.

The company with which we booked a 3-bedroom apartment in 2016 doesn’t offer the apartment where we stayed anymore. You can book a different, one bedroom, apartment in the same building – Villa Sunrise.

The 3-bedroom we booked in 2019 in Jelitkowo part of Gdańsk isn’t available either.

Once it’s safe to travel, you’ll be able to find plenty of places to stay in Sopot or Jelitkowo on Booking.com.