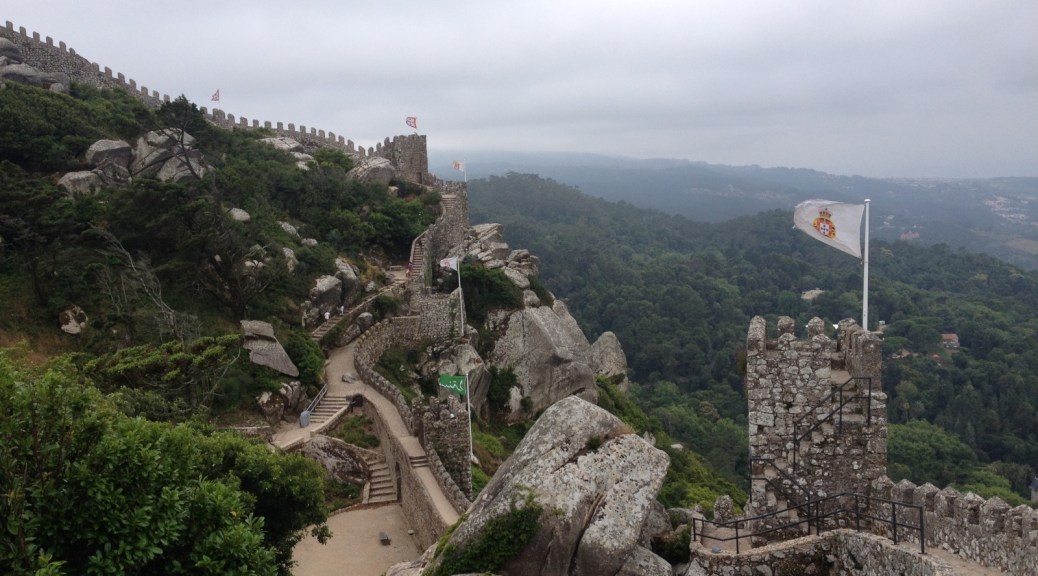 First word of advice – if you want to visit Castelo dos Mouros (The Moorish Castle) in Sintra, Portugal – get there BEFORE the parks open at 9am (10 am in the wintertime) if you can, because right at 9am the cars and busloads of tourists start pouring in, and soon every spot along the road winding toward the castle and down into the city will be taken.

Second piece of advice – if you also want to go to the Park and National Palace of Pena (Parque e Palacio Nacional de Pena) – wear comfortable shoes with good, non-slip soles, because that will be a LOT of walking.

And last but not least – bring a jacket or a sweater, because even if it’s the middle of the summer and hot down below, it might be colder and windy up on the mountain. It was when we were there in July 2014.

Both the Moorish Castle and the neighboring Palace of Pena are high up on the mountaintops of Serra the Sintra (Sintra Mountains), so going back to the parking – keep in mind that the road is one way, so if you don’t find a spot close to the entrance, you’ll have to go all the way down, circle around toward the entrance, and try your luck again.

And that road is steep and winding, as you can see on this screen shot from Google Maps. THAT is why I repate, try to get there early. Unless you enjoy driving down roads like that.

(Click on the screen shot, to go straight to Google Maps. Also, have some fun and drag the “street view” figure onto one of the tight bends, look around, and do a short virtual drive. You’ll see how sharp the turns are.)

Now, even though the place is called “The Moorish Castle,” calling it a “castle” is a bit deceptive. Very little remains of the buildings. What is left are the ramparts, the defense walls winding their way on the side of the mountain.

You may think that just walls are not worth the trip and the €7.50 entrance fee (€26.00 for a family with two adults and two children), and you may hear that Pena is prettier and more popular with the tourists, but believe me – The Moorish Castle is definitely worth a visit!

There’s a reason why it’s #4 on the TripAdvisor’s list of 26 attractions in Sintra, and why Sintra is on the UNESCO list of World Heritage sites.

I’m afraid I’m not a good enough writer to fully convey the beauty of this place. I think the Lonely Planet put it best when they said:

The 9th-century Moorish castle’s dizzying ramparts stretch across the mountain ridges and past moss-clad boulders the size of small buses. When the clouds peel away, the vistas over Sintra’s palace-dotted hill and dale to the glittering Atlantic are – like the climb – breathtaking.

There’s something magical about climbing those gray stone steps set over a thousand years ago (around 9th century), now covered with orange lichen and green moss,  as the wind whistles around you through the cracks between the stones.

You are so high up you feel like you’ve left the rest of the world behind you, far, far away, way at the foot the mountain. It’s just you, the castle, the mountain, and the few random souls who also found their way to this secluded place.

The ineffable beauty of the place simply leaves in you awe.

Even our teenage son, who’s at that age when it’s hard to impress him loved this place, and it was a pleasure to see the gleam in his eyes and a hint of a smile as he looked around from the Kings Tower, the highest point of the castle.

You can read more about the Moorish Castle and its history, on the official page of the Parques de Sintra.

According to the information on the map you can pick up when you buy the tickets, “the slopes of the Morrish Castle were occupied by Neolithic communities” as early as 5000 B.C. The castle was established in the 10th century, after the current Portuguese territory was conquered by the Moors, and established the Caliphate of Cordoba.

What I found interesting was that in 1109 the Castle was conquered from the Moors by King Sigurd I Magnusson of Norway, who was on his way to Palestine on pilgrimage. You can read more about King Sigurd, in The Daily Beagle’s blog post “Sigurd the Norwegian Crusader King.”

If you want to read a really detailed timeline of the region, you can find it on this Serra de Sintra site.

I am really glad the Portuguese Tourism Office, together with other sponsors, decided to renovate the area in 2013. I hope the word of the castle’s beauty will spread and more people will fall in love with this amazing place.

If you’d like to see more photos (a LOT more photos) from the Castle of the Moors, see our Castelo dos Mouros Flickr photo stream.

(added November 16, 2014 – if you’d like to see  pictures not only from the Castle of the Moors but also from Sintra, head over to Get Lost Project’s blog post “Sintra – the city of castles, Portugal.“)

All of the websites linked above are also pinned to our Castle of the Moors Pinterest board.

And last, but not least, do watch this YouTube video about the Moorish Castle (in Portuguese but with English subtitles). It begins with amazing aerial view of the whole area, and it lasts only three minutes.

Where to Stay in Sintra?

When we visited Castelo dos Mouros we didn’t stay in Sintra. We were staying about one hour away, in Praia D’el Rey.

However, there are plenty of apartments right in Sintra you can book, if you’d like to stay in this town. You should, actually. There’s enough to see in Sintra for at least a few days. I hope we’ll go back there some time to see the other castles.

10 thoughts on “The Amazing Castelo dos Mouros (The Moorish Castle) in Sintra, Portugal”