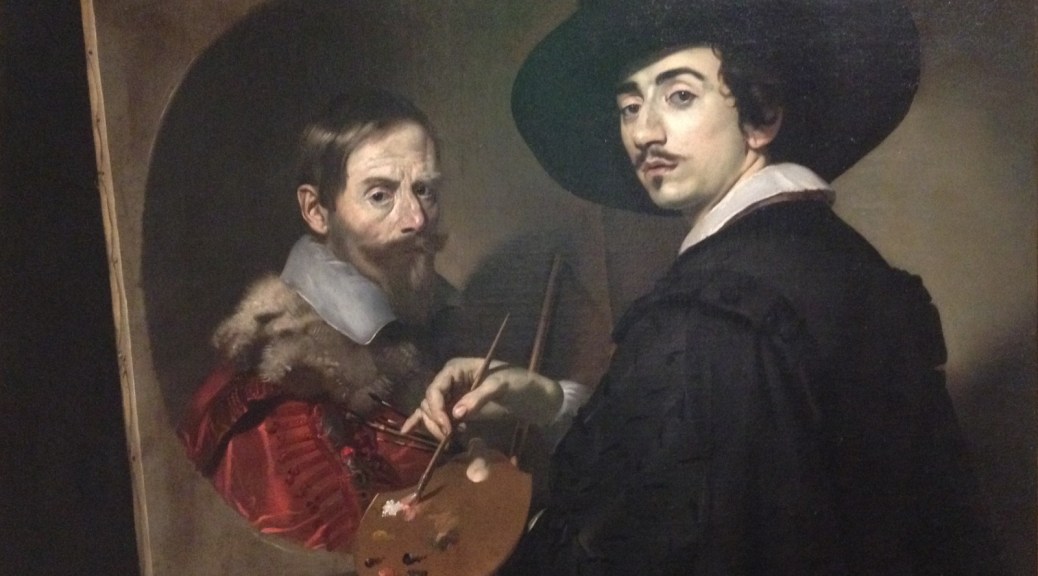 If you are not going to visit the Harvard Art Museums for a while, or at all, because Cambridge, Massachusetts way off your itinerary route, and you like to read about art, read on.

Last week I posted close up photos of a few details from five paintings at Harvard Art Museums that I found interesting. Some of them would be hard to miss as they are quite prominent in the painting, some might take some looking for, since they are just a small part of the overall piece.

The blobs of paint on the easel in Nicolas Régnier’s “Self-Portrait with an Easel” are hard to miss because the easel is positioned right in the center of the paining and is quite prominent, though it would not be the first thing you’ll look at, I bet.

What captivated me in Nicolas Régnier’s “Self-Portrait with an Easel,” painted around 1620s was… well…. how pasty pale he is. 😉

I like going to museums, but I am by no means an art buff, so you probably won’t find it surprising that I’ve never heard of Nicolas Régnier before. Unless you specialize in baroque art you probably haven’t either, because Régnier,  a Franco-Flemish baroque era painter, seems to be little known.

Régnier doesn’t even have an entry in the Encyclopaedia Britannica, though the Oxford Index does mention him, and apparently a book about Régnier by Annick Lemoine, published in 2008, won the art book prize from the  Syndicat National des Antiquaires.

But just because Régnier isn’t famous, doesn’t mean I can’t like a painting by him, does it?

Régnier’s self-portrait reminds me of several other paintings from that era that I’ve seen at various museums – dark backgrounds, subjects dressed in dark clothes, and those prominent and striking pale faces.

Luis de Morales’s portrait of Juan de Ribera at the Prado Museum in Madrid, Spain, is a good example, though the electronic file does not render the colors adequately, especially the variety of shades of dark.

Going back to pasty white – I wondered sometimes if everyone was really so pale back then, or if the subjects’ pasty, nearly translucent skin was just a thing of fashion and that’s how everyone was painted no matter what they really looked like.

In Régnier’s self-portrait, however, the face of Marchese Vincenzo Giustiniani (the man he is painting) is much more pink than Régnier’s.

It could be the age difference – Marchese, who apparently was Régnier’s primary patron, is obviously much older, and older people are more prone to redness around their noses and cheeks.

I wonder if Marchese liked this painting…

In this painting, both Régnier and Marchese Vincenzo Giustiniani seem to stare, yes stare, not even just look, straight at you, Régnier with curiosity, and Marchese with a frown, as if he were saying “Why are you interrupting?”

By the way, on my monitor the faces in the image of the painting on the Harvard Art Museums’ site have a much more yellow tint than both my photo and especially the original. That’s why you really should go see the painting for yourself. 🙂

However, the Harvard Art Museums’ page about this painting is worth looking at, because it lets you switch between color and black and white, and the black and white version shows better the details in Régnier’s dark jacket, which is black, but painted with different shades of black. Check it out.

All in all, it’s a rather striking painting.

If you are interested in learning more about Régnier, there isn’t really a whole lot on the Internet about him, but I did find this painting at the Nationalmuseum in Stockholm, Sweden, quite interesting – “Fortune Telling Scene: Sleeper Awakened by a Young Woman with a Lit Wick.”

I wonder what the story behind this painting is…

It’s a wonderful community of travel bloggers who write about every corner of the world!