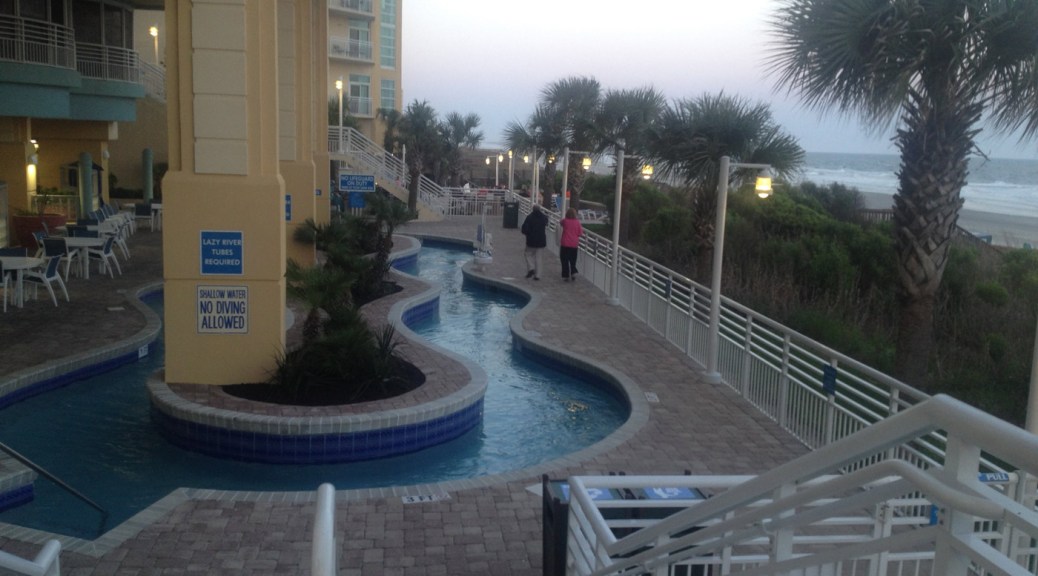 For April vacation this year, I needed to find someplace to the south to take the kids. Close enough from New England that it would be a reasonable drive, yet far enough south that we could think about swimming in outdoor pools. It had been a brutal winter!

Eventually I settled on going to Myrtle Beach, South Carolina, to the Wyndham Ocean Boulevard.

Unfortunately, Jolanta couldn’t take time off this April, so it was just me and the kids. We packed our stuff in the car and off we went, without telling my wife where we’re going. The first time we called home, she accused me of kidnapping the kids. 🙂

It’s around a 900 mile drive from our house to the Ocean Boulevard resort, which is actually located in North Myrtle Beach. On the way down, since we got a late, midday start, I decided to break up the trip into two halves and spend the night on Maryland’s Eastern Shore and take a scenic drive across the Chesapeake Bay Bridge and Tunnel the next morning.

I had read a bunch of the reviews of the resort ahead of time, and the only major complaint  people seemed to have was the parking situation. The pools looked really great though, and there was a good option nearby for a dolphin watch cruise, so off we went…

When we got there it didn’t take very long for me to realize why there were so many complaints about the parking situation. In fact there was plenty of parking in the garage. The issue is about where the parking is.

The resort is located in four buildings, straddling S. Ocean Blvd. Three of them are on the beach side of the street, and there is some parking underneath those buildings, but not enough for all of the cars. The fourth building on the other side of the street has a lot more parking space, and what happens is most people end up parking over there if they don’t get in early or if they go out to dinner. When that happens, they have to walk across the street to get back to their building, poor souls.

At the resort we had a three bedroom suite, which was more than enough for me and the kids. We actually got upgraded from a two bedroom suite.

The three bedroom suite has a nicely sized master bedroom with a king bed, whirlpool tub and shower in the master bath. There’s another bathroom on the other side of the suite next to one of the smaller bedrooms, which opens both to the bedroom in the hallway. The third bedroom has two double beds.

There’s a full kitchen in the suite, nicely done with the stove, oven, microwave, and various other things you could imagine a fully stocked kitchen should have. Around the corner  was a laundry closet, with a stacked washer and dryer. The sitting area, with a pull out sofa was nice, but could use one or two more chairs.

We all really enjoyed the pools at the Ocean Boulevard. There were two lazy river pools, one of which was smaller and meant for the little kids.

We stuck to the bigger one, you can see up in the featured photo.

There were two larger sized outdoor pools. One was a rectangular shape, but it was an infinity pool with the view looking out over the beach and ocean. The other was odd shaped, with two major sections in it, one being a wading pool for smaller children, and the other being deeper. There were also four hot tubs outside, which seemed to be well maintained.

The indoor pool was a bit smaller, but on several of the days we were there, it was windy enough that we decided to swim inside. The chlorine did seem to sting a bit more using the indoor pool, but I think that’s because you’re inside and it tends to concentrate more in the air. There was also another hot tub inside.

Across the way was a small, but well appointed exercise room, which I never noticed anyone using. We went in for a little while, but the signs did warn not to allow younger children on the equipment.

We were able to get a wonderful deal on the stay at the Ocean Boulevard Resort because we booked it through a person I found in an online forum. Ron and Joan Dungey are now my go-to people for staying at any of the Wyndham resorts, as I found them to be very professional and of very high integrity. You can find them through their website.

You can also check Wyndham Ocean Boulevard’s prices through Booking.com.

Check Momondo for the cheapest flights to Myrtle Beach from wherever you are.