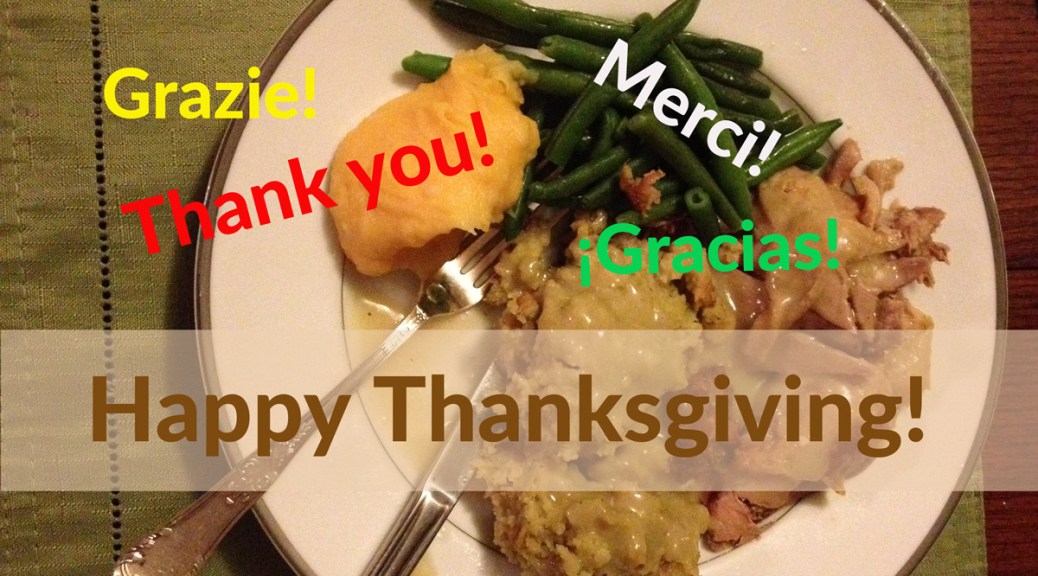 As our family gets ready for the annual holiday of Thanksgiving, probably the most important holiday in the U.S. because it’s celebrated by people of all faiths, I think back to a November more than twenty years ago, when my husband and I, married just three months prior, got stuck on I-89 in Vermont when our car broke down.

We had just visited my husbands’ parents in Vermont, and with a huge turkey they gave us slowly thawing in the trunk of our old station wagon, we were heading back to our apartment in Boston, to celebrate our first Thanksgiving together.

Our car broke down about half an hour after we got on the highway.

And it was raining.

That was before everyone had cell phones, and in those days if you broke down along a stretch of a highway far from the nearest emergency call box in cold November rain … Well… it wasn’t fun.

Luckily for us, a van with a bunch of people coming back from a ski trip stopped and asked if we needed help. They gave us a ride to the closest gas station from where we could phone my in-laws and ask them for help. My father-in-law arranged for the car to be towed, and drove us all the way to Boston that day.

So as we sit down to dinner tonight, and think of all the things we can be thankful for, I want to say

“Thank you to the strangers on I-89 some twenty years ago who gave a young couple a ride when their car with a frozen turkey in the trunk broke down.”

Here are a few more stories about helpful strangers collected from my fellow travelers:

Amber from The World Beneath My Feet says:

“Thank you to the stranger . . . who worked at Ailwee Caves in Ireland.”

“She was the sweetest lady, who happened to study abroad at my college when she was younger. When she found out we were planning to go to the Cliffs of Mohr the following day, she insisted that we should go that day. The weather was suppose to get bad starting that night and continue on through the next day, she said. She pulled the weather up on her computer to show us how high the winds were suppose to get (70mph), and called her husband to confirm the weather. She also pulled up a map for us and wrote down all the directions to get us to the Cliffs of Mohr.

This lady was the sweetest and took time out of her day to help complete strangers. I’m glad she did, because the Cliffs of Mohr were a must-see for me, and if we would have waited until the following day the visibility would have been poor and the winds would have been very dangerous.”

We are the Nomadic Boys, Stefan and Sebastien, gay couple and travel bloggers. We left our lives in London in June 2014 to eat our way around Asia, with our baby.

No not that sort of baby, our Panasonic TZ60 baby. She’s has been a godsend in our travels: light, compact and very carry friendly, while taking amazing photos at the same time with that very large zoom of hers. We have a lot of love for her!

So, our final morning in Yangon, we woke early to see the monks’ almsgiving ceremony on the streets outside. As usual we missed the alarm clock and came late, missing most of it. But then we had to hurry to get to the airport to get our return flight back to Bangkok.

Stefan, excited with his photos, was going through them and moving them on to his laptop in the car. But fatigue got hold of him (remember it was an early start) and we FORGOT our baby in that taxi! We didn’t realise until that evening when we arrived at our friend’s house in Bangkok and were unpacking.

We were livid! Sebastien even considering filing divorce papers (poor Stefan!). How dare DARE he compromise our baby like that?

But – we contacted our hotel in Yangon. Guess what? The taxi driver found the camera, returned it to the hotel and the next day they arranged for one of their guests to bring it with them on their flight to Bangkok to meet us and reunite us with our baby.

Can you believe that? Anywhere else in the world, a taxi driver would have just kept it right?

It goes without saying, we were truly astonished and humbled by the kindness of that taxi driver and hotel staff of Three Seasons Guesthouse in Yangon!

I was able to experience the real Corsica through the generosity of complete strangers. It was my last day in Corsica, and I’d woken up early to catch the 6 am sunrise at the pier. As I walked back into town, I saw an older woman in pajamas and hair curlers hanging laundry. I took a photo, and then heard her shout down, “Do you want to come up?”
I was sure I’d misheard her, so she repeated the invitation in broken English, then shouted up her door code. I went to her apartment on the second floor and we chatted for a while. She introduced herself as Marie, and when I told her I was flying out that evening, she said, “Ah! But you will still be here for lunch?”
So at 12 on the dot, I found myself at the bar underneath her apartment — where I then spent the afternoon drinking pastis, eating fantastic homemade Corsican food, and shooting the breeze with Marie’s group of gruff, but friendly, Corsican fishermen friends.

These men were regulars, this lunchtime meeting was a daily ritual — and they had invited me into it. They accepted me immediately as bar family. When I eventually had to leave, Marie gifted me a bottle of Cap Corse, the local aperitif.

“Without a doubt, that early morning laundry encounter with Marie led to an experience that made the entire trip for me.”

“Thanks to a complete stranger we met on a ferry through the fjords of Patagonia de Chile back in January 2015.”

Juan Pablo was relaxing with his Yerba Mate on the top deck of the ship with his son and two collie sheepdogs. I got talking to him because I was playing with his dogs and he turned out to be beef farmer from the town of Coyhaique.  where we were heading to start our long hitch hike down the Carretera Austral to Villa O’Higgins.

As the ship pulled into the dock at Chacabuco dock in Puerto Aysen, he told me to give him a call if we needed any help or a place to stay. We called him when we arrived in Coyhaique, he picked us up and took us back to his family farmhouse. We stayed with Juan for five days while he toured us around his huge farm and watching the real Patagonian horsemen round up the cattle.

It was an amazing experience and none of it would ever have happened if we hadn’t met that one awesome, complete stranger on the roof of a ferry!

Isabel, from Around The World With Isabel, says:

“Thank you, kind stranger from Paris, for making my experience in Paris, and Europe for that matter, such a wonderful and heartwarming one. I have so much to thank you from the very moment I stepped into Paris.”

Paris has been the first stop of my 6-month-long leg across Europe, the very first trip out of my home country that I made on my very own. You can imagine the trepidation that comes with going to a foreign country for such an extended amount of time.

“Thank you for waking up at 5am even though you are not a morning person, to take the first train to the airport to pick me up. Thank you for carrying my luggage, all 30kg of it, up and down flights of stairs from one metro station to the next as we switch trains.”

That was the very first time we met after a couple of exchanges over Facebook.

“Thank you for giving up your big and cosy bed for me while settling for a pullout sofa for the 5 days I stayed with you. 30 square metres isn’t big, yet you willingly gave up half of your private home space for someone you barely knew.”

We connected through a mutual friend, and when I told him my original planned accommodation in Paris, he warned me of the dangers of the location and offered unhesitatingly his place.

“Thank you for exploring the Parisian streets with me and for watching out for me on crowded streets. Thank you for not minding my presence while you celebrate New Year’s Eve countdown with your bosom friends. Thank you for taking care of my meals although you didn’t have to.”

When I suggested bringing him out for a meal as a way of saying thank you, he refused adamantly, encouraging me to save my funds for my travels around Europe instead. How could a stranger whose existence I am unaware of treat me as if I were part of his family overnight? It takes immense trust and compassion to be able to extend such kindness and generosity. For that, I am eternally grateful.

The world is full of kind, helpful strangers. I bet you have a story of your own. Feel free to share it in the comments section!

And Happy Thanksgiving to all of you who celebrate it!

(For those of you who have no idea what Thanksgiving is about, and why I posted a picture of a plate of food – Thanksgiving is a national holiday in the U.S., celebrated on the third Thursday of November, during which families get together and traditionally serve turkey with stuffing, potatoes, cranberry sauce, and other yummy stuff. The featured picture at the beginning of the post is a photo of one of our Thanksgiving dinners. As the name implies, it’s a holiday of giving thanks, hence the idea behind the post.)