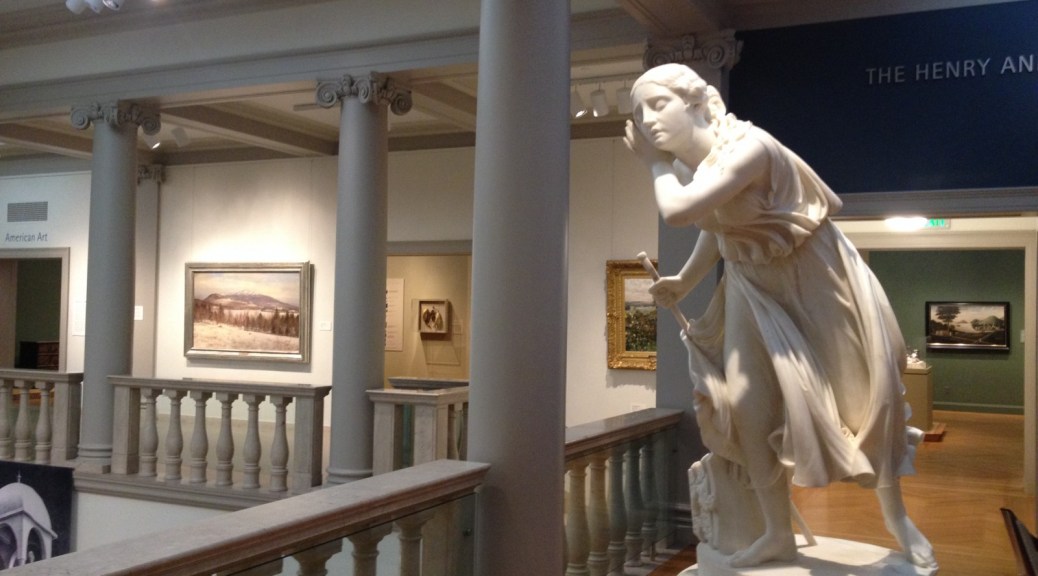 I admit, if it weren’t for the M.C. Escher exhibit, I’d probably never think of going to the Currier Museum of Art, in Manchester, New Hampshire. And that would be too bad, because I’d miss out on a fun, inspiring, and educational afternoon.

As an article “Currier Gallery of Art: a small but distinctive collection,” published in The Christian Science Monitor in 1981 said:

[T]he Currier, considered to be one of the best small art museums in the US, is better known among curators and art historians in Paris and New York than it is in its own region. Both the Louvre and the Metropolitan have borrowed artwork from the compact gallery, which has as its motto, “One masterpiece is more to be desired than a roomful of run-of-the-mill paintings.”

Currier’s original permanent collection of 1929 consisted of only 50 paintings, donated by a local businessman moving to California, as well as antique French wallpaper.

Over the years, however, the museum had worked on acquiring a wide-ranging variety of art, to include Claude Monet, Andrew Wyeth, and John Singleton Copley among the others.

The museum’s holdings expanded significantly in 2001, with Henry Melville Fuller’s bequest of $43 million and a prized collection of sixty works by noted nineteenth-century American painters. You can read more about Fuller and his generous gift in “A Magnificent Legacy to the Currier Gallery of Art: The Henry Melville Fuller Bequest,” featured in Antiques & Fine Art Magazine.

You can admire both American and European art at the Currier, and both modern and old.

For instance, in one room you can see Pablo Picasso’s Woman Seated in a Chair, which he painted in German-occupied Paris during World War II.

Then, a few rooms away,  you can compare the modern artist’s portrait to the late 1400s Portrait of a Lady, by Lorenzo di Ottavio Costa.

The museum’s decorative art collection includes not only amazing antique furniture, silverware, and clocks, but also modern objects, like this stunning 1991 Watering Can crafted by Alan Perry, a metalsmith, and currently a part-time instructor at the New Hampshire Institute of Art in Manchester.

When you look through the online collection, make sure you click  the “more information” link to read the wonderfully written descriptions and context about the artwork, as well as the analysis of the piece, and frequently, bibliography as well.

Here are some of my favorite modern pieces:

But Currier also has more “classical” American paintings like these:

Don’t forget to spend some time admiring the fine details in the glass paperweight collection donated by Henry Melville Fuller :

And make sure you stop in the European room where you can see paintings like this Still Life of Fruit on a Kraak Porcelain Dish, by Balthasar van der Ast, from 1617:

It is fascinating to see how different visitors will focus on different items in a museum. I don’t even remember some of the paintings in Another Walk in the Park’s post, but then again, I had to skip the “Contemporary” room when I visited, because the museum was closing.

The site, created in 2005, provides teachers with information, concepts, activity suggestions, and vocabulary related to works of art in the collection at the museum.

Not only art but also history and social science teachers will find a lot of interesting information on this site, which suggests a variety of activities for pupils, divided into sections for elementary, middle, and high school levels.

The Museum created a list of educational resources for the temporary exhibits as well. Its “M.C. Escher Online Resources” page about the M.C. Escher exhibit, open from September 20, 2014 through January 5, 2015 included links to YouTube videos, educator resources created by other museums that held M.C. Escher exhibits in the past, and outside sites explaining tessellations, prints, and mezzotints.

By the way, photography was not allowed in the M.C. Escher exhibit section, that’s why I don’t have any photos of M.C. Escher work. However, you can see examples of his mind-confusing engravings and drawings in “Walking to Infinity” post by Humoring the Goddess.

History of the Currier Museum

The museum was named after New Hampshire Governor Moody Currier and his third wife, Hannah Slade Currier, who bequeathed their mansion and  considerable wealth to create the Currier Gallery of Art, officially chartered in 1919, four years after Mrs. Currier’s death.

Ten years later, in 1929, the Currier Gallery of Art opened in a building designed by Edward L. Tilton and Alfred M. Githens. In 1979 the building was added to the National Register of Historic Places, and then expanded in 1982.

In March 2008, the museum reopened with a 73,000-square-foot, $14 million renovation and expansion designed by Boston-based Ann Beha Architects (ABA). You can see the stunning photos of the design incorporating the old with the new in articles “Currier Museum of Art” in the Architect Magazine, and in a post “The Currier Museum of Art” on the OpenBuildings site, founded by architects and architecture fanatics to provide an online resource for learning about architecture.

The Currier Museum is located at 150 Ash Street in Manchester, NH.

If you happen to be in the area, the Currier Museum of Art is definitely worth a visit!

Where to Stay in Manchester, New Hampshire?

When we visited the Currier Museum we just did a day trip, since it’s not too far from where we live. If you’d like to stay overnight, there are several hotels in Manchester, NH to choose from.

It’s a wonderful community of travel bloggers who write about every corner of the world.

Thank you for reading, and, as always, comments are more than welcome!

8 thoughts on “Currier Museum of Art, Manchester, NH: A Review & a bit of history”