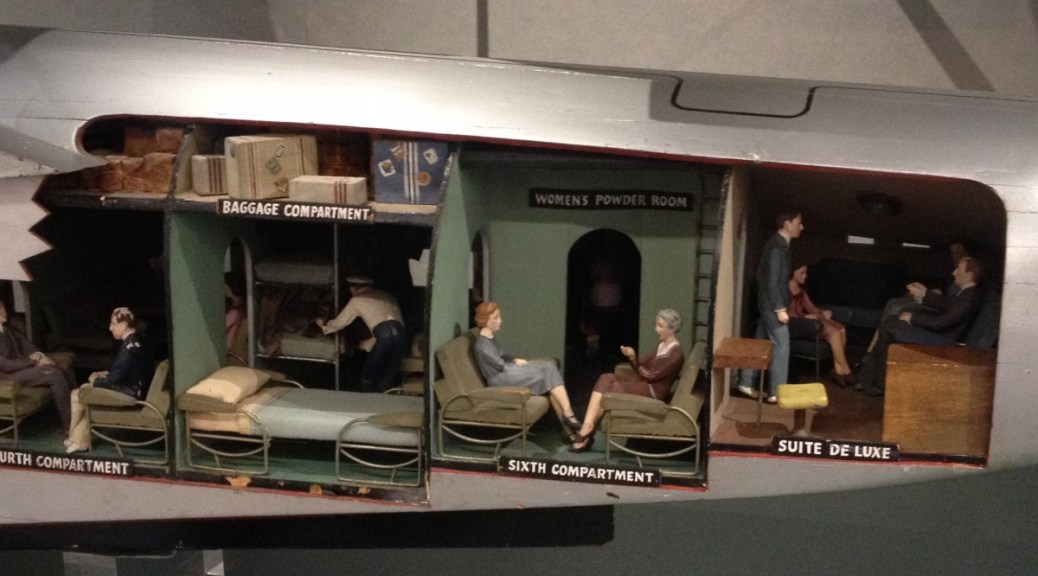 When my sister was hired as a stewardess by the Polish Airlines LOT back in the 1980s, before she flew anywhere she had to attend trainings not only about airplane layout and duties and responsibilities of her job, but also complete a training on proper make up and behavior.

That’s why I stopped when I saw a big sign asking “Could You Be a Stewardess in the Early 1950s?” while wandering around the huge Smithsonian National Air and Space Museum in Washington, DC.

The sign above is part of the America by Air exhibit, located on the first floor of the museum otherwise dominated by impressive rockets, missiles, and airplanes.

There, underneath the forward fuselage of Boeing 747 you can also see around 30 uniforms of flight captains and stewardesses, from the United Airlines’ grey and demure suits of the 1940s to bold and colorful designer uniforms commissioned by Braniff Airways and Air California in the 1960s.

If you’re interested in the history of commercial aviation, but can’t go to Washington, DC, you can browse through the extensive online exhibit of “America by Air” where you can read about preparing the uniforms for the exhibit on the “Commercial Flight Uniforms: On Display and in Good Hands” page of the “Behind the Scenes” section.

(Apparently, since many uniforms were donated by former captains and flight attendants, the mannequins displaying them had to be custom made to fit the uniform, not the other way around.)

While you’re browsing the website, take a moment to play the “Airline Ticket Price Meter” which explains how, depending on your options, your ticket might cost from $160 to over $1600 depending on what options you choose.

One option that I found particularly true when it comes to ticket price is flying to or from a different airport, especially during school breaks. That is why we had driven to the JFK airport in NYC in the past, since even with paying for the two-week economy parking the price of four tickets was around $500 less than flying from the closest airport – Boston’s Logan.

If you do get to see the “real” exhibit in Washington, DC, try not to get jealous of all the legroom on the Pan American Airways’ Clipper of the 1930s you can see below and in the featured image.

1940s $278 overnight to Hawaii is equal to over $4,500 in today’s dollars, so in those days all passengers paid “business class” prices. There were no cheap flights.

Nowadays you can get a Business or First Class round trip flight from BOS to HNL for less than that, and if you don’t mind being cramped for a few hours, the economy class is around $800 last time I checked. Still not exactly cheap, but more do-able than $4,500.

More on the Smithsonian National Air and Space Museum

The DC part of the Smithsonian National Air and Space Museum is located on the Independence Avenue at 6th Street SW, and is open daily except December 25, from 10:00 am till 5:30 pm.

As at all Smithsonian museums in DC, admission is free of charge.

When we visited D.C. we did not stay in Washington, D.C. proper. We got two very nice connected one-bedroom suites at the Wyndham Old Town Alexandria (review coming up). It was just a short walk to the subway that takes you to the Mall where all the museums are.

Should you want to stay in D.C. proper, there are of course plenty of hotels and apartments to choose from. Take your pick!

#TheWeeklyPostcard, run by Travel Notes and Beyond, is another place where travel bloggers can share their most recent posts, and read other travelers’ stories.

You can read a lot of interesting stories on those blogs!

12 thoughts on “America by Air Exhibit at the Smithsonian National Air and Space Museum, in Washington, DC”